Earlier I explained how someone with no current ties to the New Order can join our Knights. Not long afterward, I received a report from Agent Alana Charen-Teng about the baptism of a new Knight of the Order:

Like all who have pure motives, Bixter Baxter was eager to prove himself.

Our Agents tested Bixter by offering him a chance to help destroy a Code violator's Hulk. 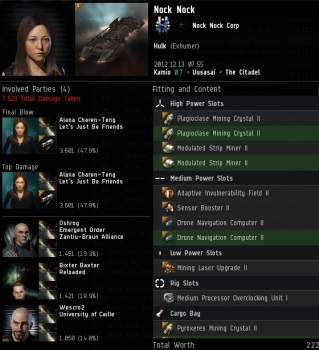 Bixter fleeted up with the New Order and contributed his Catalyst to the cause. The rebel miner didn't see it coming. The proof?

Alana did what Alana does best: Popping the Code violator's Capsule and extinguishing its implants. Nock Nock lost more than 3 billion isk worth of implants, all because he refused to join the New Order and pay for a 10 million isk mining permit. 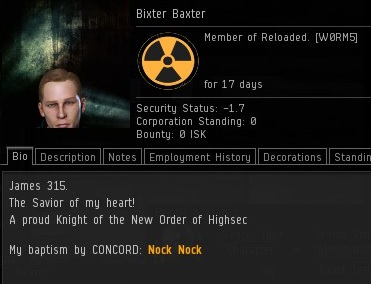 And so it was that on his first outing with the Knights of the Order, Bixter was able to help dispense great justice in Kamio. In the highsec we seek to build, courage always pays off!
Posted by MinerBumping at 18:42