I hope everyone is enjoying this holiday season. I don't have a segue or anything here, so let's dive right into the Grab Bag of miscellaneous miner tears! 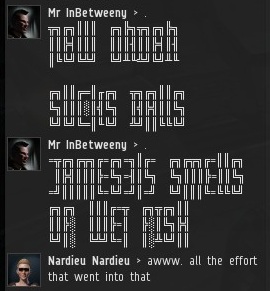 You know you've made it when you're immortalized in ASCII.

Perpetual rebel miner Rokmal Serala was hoping for a Christmas truce. But that would require the Code violators to put aside their violations for the day, and they didn't do it. So the New Order blew up several billion isk worth of their stuff.

Even fleets of half a dozen Catalysts and multiple bumpers operating simultaneously don't convince some people that we're not all my alts. 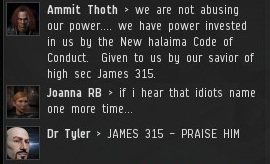 Statistically, the more often a miner reads my name, the more likely he is to follow the Code and live a fulfilling life.

MadeinUSA Sotken is more pessimistic about the movement than most. 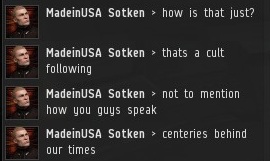 What's wrong with the way we speak? Verily I say unto thee, followeth the Code and save thine Mackinaw!

The James 315 = The Mittani meme is still out there. Some people are still sore about that whole Fanfest thing, which appears to have taken on a life of its own. 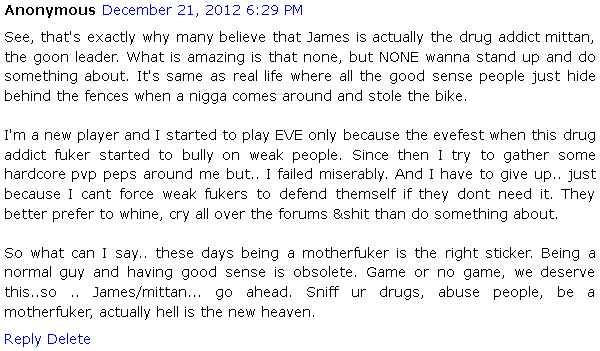 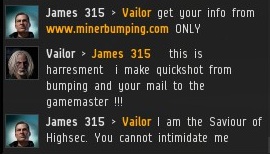 I forgot to send a Christmas card to the GM team, so I guess Vailor's screenshot of me bumping him will have to do. 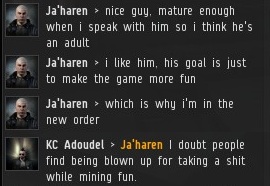 KC Adoudel, like so many, completely misinterprets our bathroom protocol. It's there to help you. To help you!

At some point, the miners do begin to realize the New Order can't be stopped. They cope in different ways. Weird metaphors are one such method.

Can there be any doubt that we are the leaders of the civilizing forces in highsec? 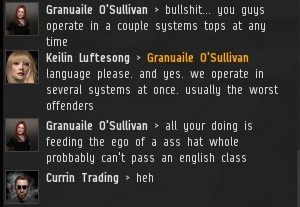 Granuaile O'Sullivan is furious about something I've done, and she takes issue with my use of the English language. Somehow I'm not offended by her criticism.

Biggie09 does a good job of articulating the carebears' beliefs about the sandbox: You should only blow someone up if they give you permission.

Like so many others, Chi Sho compares blowing up or bumping a miner to terrorism.

Well, that does it for this edition of the Grab Bag. Have a happy New Year every--