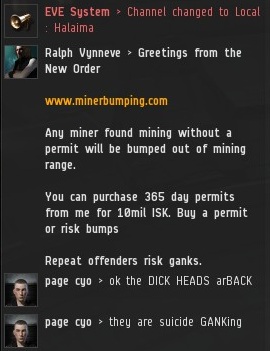 And we're back for another edition of the Grab Bag of miscellaneous miner tears! 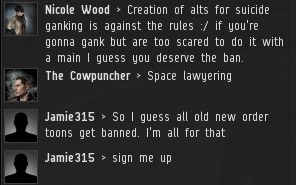 Say, remember when we all thought CCP's statement about miner bumping would put all of the space lawyers out of business? Wrong! To the carebears of highsec, anything that troubles them is against the EULA. 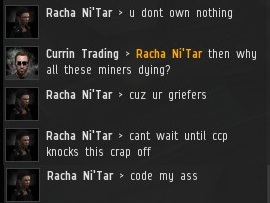 Racha Ni'Tar joined the ranks of those who feels combat in highsec should be, and will be, banned by CCP. 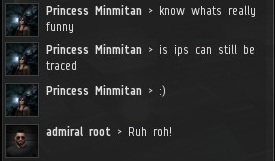 After her elaborate mercenary spider-tanking plan failed, Princess Minmitan cooked up another mysterious plot against us. If you're reading this, her IP trace is still in progress. They can take years, I hear.

Kamio miners have dialed back the Nazi comparisons of late. Our suicide ganking has inspired new fears of religious zealotry. 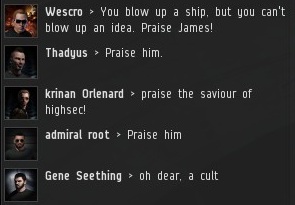 I'm not sure how much of a future the "cult" line has. After you've name-dropped "Jim Jones" a few times, what are you left with? The tyrant comparisons at least give you a stable of different dictators to point to.

Jeffrey Dahmer is a new one. He's a serial killer best known for cannibalism, as opposed to being a cult leader. So I'm not certain which of Dahmer's skills Harry Bakus admires. 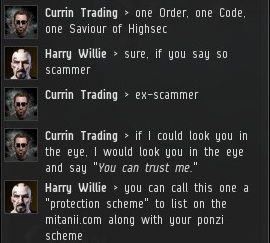 The rebirth of Currin Trading as my suicide ganker alt has some opponents of the New Order buzzing. They're still certain the New Order is a scam somehow, though they can't quite articulate what the scam is. 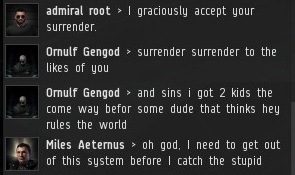 Ornulf Gengod shows us how creative miners can be when they explain why they just happen to leave immediately after being bumped out of range. The Miner Bingo line is "I was full anyway", but Ornulf has a better one: My children need me!

Some say miners are peaceful, but that's not my experience. babydoll Adoudel and I shared an interesting series of EVEmails after she was ganked. She claims she was a different person before we arrived. But how can we in the New Order know that? Is this like the old question about whether a tree falling in the forest makes a sound if there's no one around to hear it?

Seraphine Belvar screams in local and claims the rest of the miners want to scream, too. If so, why don't they? Because they're AFK, that's why. It's hard to express your displeasure when you're not even there. See the science fiction classic, "I Have No Keyboard, and I Must Scream".

Ornulf returns to his computer, his actions lending weight to Seraphine's theory. 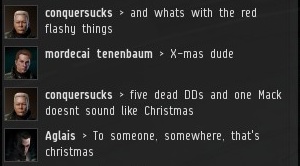 There's no better way to celebrate the holidays than by complying with the Code, and punishing those who refuse.
Posted by MinerBumping at 02:33