The Education of Brim Wilf, Part 2

Previously, on MinerBumping... Ice miner Brim Wilf was terminated by the Knights of the Order for the crime of unlicensed mining in highsec. Brim launched into a rant about the injustice of not being able to mine without interference in a sandbox game. Agents rushed in, hoping to save Brim from his distorted carebear view of EVE.

Brim wanted to know why I get to decide what the rules in highsec are. That part's easy, since I explained it way back in October. (Time flies, doesn't it?) 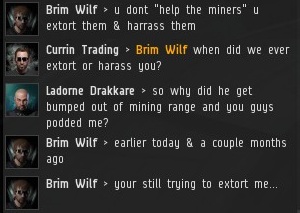 Ladorne Drakkare also had a bone to pick with me. He, too, had been killed that evening. Brim revealed that this wasn't the first time we had ever dealt with him. I can't keep track of all the names and faces of miners. I've bumped and killed so many people... 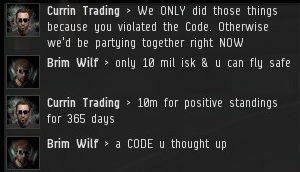 One of the most important aspects of our great movement is that our violence is non-random. If it were random, miners wouldn't have reason to change their behavior. But we follow the rule of law. That means the miners have good reason to follow the law, too. 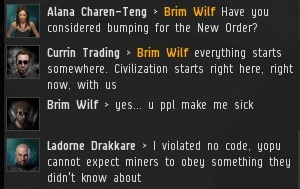 Brim was disgusted by the thought of civilization and order in highsec. Ladorne plead ignorance. 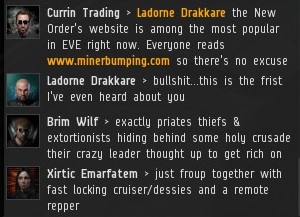 Three different reactions to the New Order, all futile. Ladorne claimed he had no knowledge of the Code. That claim that might have flown a few months ago, before we became the talk of highsec. New Order Agents are rock stars now! Brim spouted Miner Bingo catchphrases. And Xirtic Emarfatem offered bad advice on how to avoid being ganked. 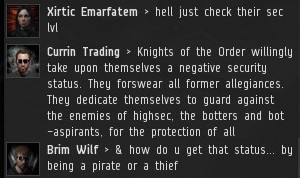 There's a major difference of opinion about what the low sec status of a Knight means. The carebears in local felt it implied some kind of negative moral judgment on us by CCP. But the Knights take it as a badge of honour. Our negative security status is the visible sign of the oath we've taken to defend the realm. Once you are clad in blinking red, there's no turning back. 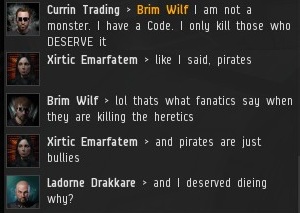 It's true that most of our gankers take pleasure in killing. Some might say we have a need or compulsion to kill, or that we develop one after tasting miner blood. Whatever dark passengers we may carry with us, they are kept firmly in check by the strictures of the Code. 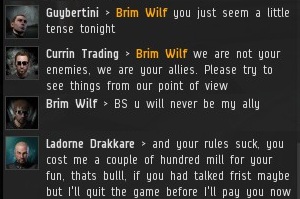 Ladorne's words prove he has lost all reason. At first, he weighs the death of his ship in economic terms, based on the couple hundred million isk he lost. But then he says he would rather quit the game than pay 10 million for a permit. So there's the value of the permit, the value of the ship, the value of his total assets accumulated from mining thus far, and the value of playing the game. How do they rank? They're all muddled in Ladorne's mind. 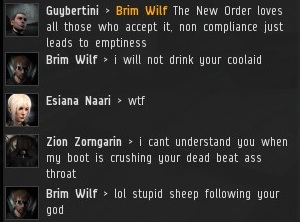 Note the confusion of the locals. They don't always understand our message when it is articulated to them in words. That's why it's so important to bump and gank miners. It's a form of communication. Different miners learn in different ways, so the New Order does not take a one-size-fits-all approach.

Consumed by anger and despair, Brim hopped into a ship and ineffectually attempted to bump Code-compliant miners. It was a tragedy. Brim became an incompetent, un-cool version of the thing he hated most.

Brim descended deeper into self-torment. He was overcome by nihilism. 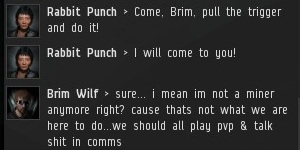 Brim Wilf departed, having lost all sense of purpose, self, and meaning. It's a powerful demonstration of the truth that a miner who disobeys the Code is engaging in self-destruction. Miners of highsec, give up your 10 million, not your sanity!
Posted by MinerBumping at 03:12