The other day I wrote a little about how someone can prove their trustworthiness and join the Knights of the Order through the Baptism by Concord. In general, new Agents find themselves going through a different kind of rite of passage: Experiencing the rain of carebear tears that falls upon New Order territory each day. 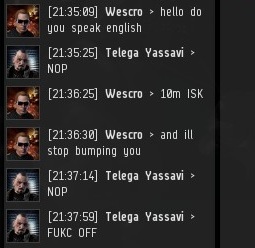 Agent Wescro is fairly new to the New Order. He has begun to encounter the resistance that all Agents must face. For some reason, Russian miners seem to cross his path a lot. 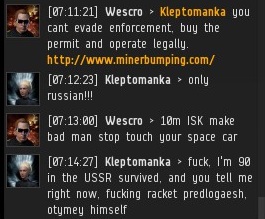 Something always gets lost in translation, but if Kleptomanka really is a 90 year old who survived the Great Purges of the Soviet Union, kudos. Kudos are not the same as a free mining permit, though. Kleptomanka thought a mass-EULA violation was the answer to the bumping problem. Luckily CCP's bureaucracy is not as corrupt as the CCCP's!

Kytren Virpio was still smarting over his recent loss. 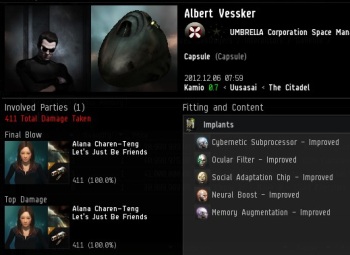 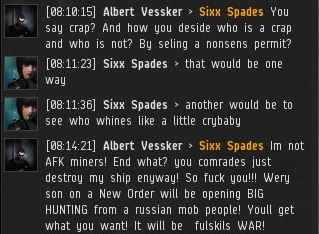 The mature response would have been to admit his guilt and purchase a mining permit. Albert chose the "threaten Russian mafia retaliation" option instead. Talk about "powerful friends in nullsec"!

The Russian mafia doesn't care about money as much as principle. They'll help Albert defeat the New Order on behalf of everyone who was killed unjustly in highsec.

The New Order has always been about bringing people together, not tearing them apart. Could Kamio's ice field become a new Match.com for Russian carebears?
Posted by MinerBumping at 18:43