The Search for MinerBumping, Part 1

From the dawn of the New Order, there have been suppressive persons acting against us. It's no exaggeration to say they've been met with difficulty. Unable to kill our invincible bumping ships, and unable to stop our valiant Knights from ganking the non-compliant, some rebels have sought alternative means of securing our destruction. 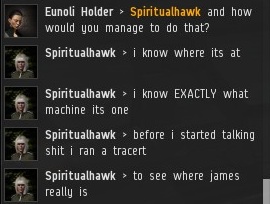 Spiritualhawk boasted in Kamio local about her attempts to find my real-life location. She's not the first to try. Could Spiritualhawk succeed where others have failed? 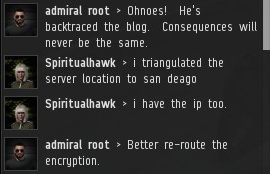 As it happens, Spiritualhawk is the alt of Princess Minmitan, who plotted to defeat the Knights of the Order by hiring mercs to spider-tank everyone. In Grab Bag #16, I commented on her attempts to trace my IP address. She left the following comment:

There's no denying it, San Diego is nice this time of year, and really, every time of year. But is that the true location of my abode, or do I just like saying the word "abode"? 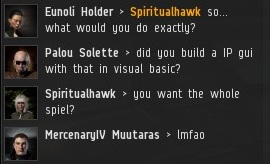 The Kamio locals were very interested to hear about Spiritualhawk's technical expertise, and how she tracked down the purported HQ of MinerBumping. One question was at the forefront of their minds: Was she a genuine, professional hacker, or just another random carebear who's watched too many '90s movies about the internet? 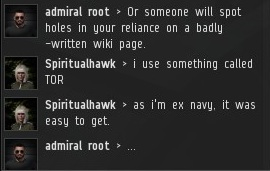 This question was promptly answered. 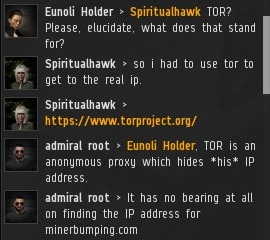 There was some confusion at first, but Spiritualhawk was keen to get it straightened out.

She discovered the domain for MinerBumping.com had been registered by eNom, along with several million other domain names. The noose tightened.

Random passersby in Kamio were puzzled by the conversation. Puzzlement is a common experience for those who travel unaware through New Order territory. 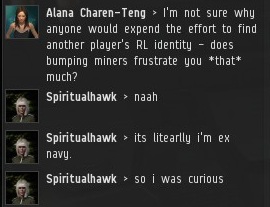 The U.S. Navy does not have an official motto, it's often said to be "non sibi sed patriae" ("not self but country"). You don't lose that sense of purpose when you leave the Navy; you carry it with you always. What that has to do with tracing the IP of MinerBumping remains a mystery. 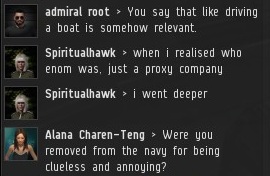 Spiritualhawk had made significant progress, unlocking the knowledge that MinerBumping's domain was registered by a company that registers domains. She was still not satisfied. She had to know more. The investigation proceeded apace. 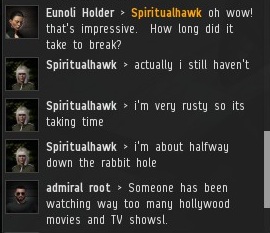 Even with Spiritualhawk's finely-honed Navy training, hacking a Gibson is no mean feat. It would take time.

The gauntlet had been thrown. But could Spiritualhawk uncover the location of MinerBumping and strike a blow for the bumped miners of highsec--or would the New Order foil her plans by opening a socket just in the nick of time?

To be continued...
Posted by MinerBumping at 03:12