The Search for MinerBumping, Part 2 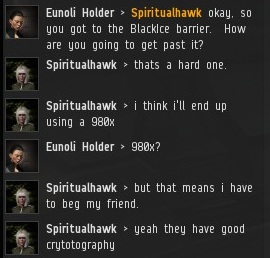 Spiritualhawk was able to track down MinerBumping's domain registration to one of the world's largest domain registration companies. But to get past their cryptography, she needed special equipment. The kind of equipment she could only acquire from a random friend of hers. 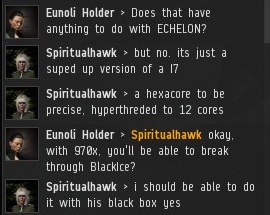 After running down her mental checklist, Spiritualhawk became optimistic about her chances. 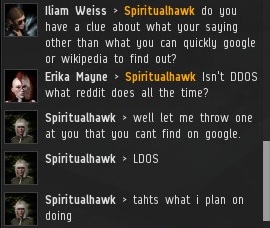 As time wore on, Kamio came to doubt Spiritualhawk's proficiency. Could she win them over?

But everything hinged on Spiritualhawk's friend, who was not presently on good terms with her for some reason. I can't imagine why.

Upon further reflection, Spiritualhawk decided her plan might not work. But she had a backup plan. Still spider-tanking mercenaries? Or something that requires a lot of bookmarks?

After Part 1 of this series was posted, Spiritualhawk returned to Kamio, claiming to know my true identity.

Some days, my "accept all convos" policy really gets put to the test. 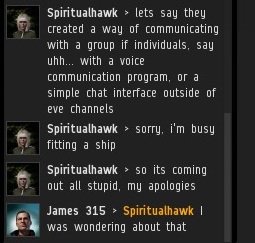 I asked Spiritualhawk to tell me how she supposedly figured out my "main", and she embarked on a circuitous route to get there. She made no sense, but only because she was fitting a ship while typing. 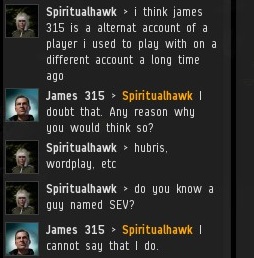 At last, she pulled the trigger. Was I someone named "SEV"? Nope. James 315 is my main. Spiritualhawk was disappointed. 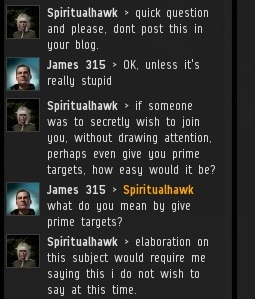 She had some other plans of how she might accomplish some task, but had trouble articulating the plans, and what the task was. No doubt some great opportunity was lost that day.
Posted by MinerBumping at 00:51