If you've been in our fleets lately, there's been quite a bit of talk about the possibility of creating a corporation to help resupply our Knights. We use up a lot of Catalysts and fittings. We're going to use up a lot more. I had forgotten, but for some reason my ganker alt, Currin Trading, already had a bunch of corporation management skills trained up from years ago. 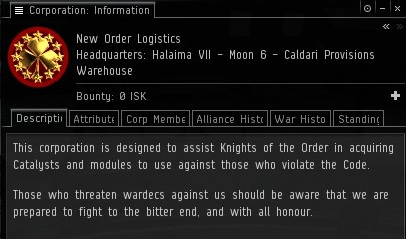 The purpose of New Order Logistics is not to have every Knight be a member. After all, the New Order transcends corps and alliances, and many Knights are perfectly happy with the corps they've already got. Moreover, allowing every aspiring ganker into the corp would cause security issues.

Nor is the purpose to create an industrial/logistics corp, despite the name. I expect this corp to be on the receiving end of wardecs before long. Everyone who joins this corp will have negative sec status. Since you're killable by everyone in highsec anyway, the wardecs won't matter.

So what is the point of this corporation--aside from the spiffy logo?

Our Knights have proven that it's quite possible to operate freely across highsec with -5.0 or worse standings. We can travel in pods when we need to move. We can use insta-undock bookmarks to nullify station camps. We can use all manner of scouting and Concord manipulation techniques to get warp-ins on targets and kill them before anyone can respond. We can even seed a healthy market for our Catalysts, within our HQ.

But it is not enough. I would like to expand our scope. I'd like to create an environment in which a group of Knights can fleet up, pick from among many different target systems, and arrive unexpectedly, raining destruction upon the enemies of the Code. In such an environment, our enemies would be even less capable of mounting a defense or adapting to our strikes. We're almost there: Our pods travel quickly from system to system, and the "turbo-priming" technique enables us to prep multiple systems without delay.

There's only one piece missing. Though we're able to seed a healthy market in our HQ, we don't yet have the ability to seed healthy markets in multiple systems at once. Doing so requires smaller stockpiles in many systems, as opposed to one big stockpile in one system. Once you're dealing with smaller stockpiles, the possibility of market manipulation gets in the way (even if it's not intentionally directed against us).

I've received correspondence from a lot of industrialists who are interested in corp contracts. In theory, these contracts allow our providers to sell ships and mods just to us, without third parties being able to buy up the stuff and relist it. Granted, there are limitations. Each individual order needs its own contract, as opposed to the market, where you can sell in bulk and have buyers buy individually.

I've also heard from people who point out the advantages of corporate hangars, with varying levels of access. Trusted Knights could use these to gather stockpiles of equipment and then distribute them to their gang members. There are limitations there, too, since we would need to rent offices, keep the hangars stocked, and deal with security issues.

I'll put in my two cents, and then I'll open up the comments for brainstorming how best to use New Order Logistics to connect our Knights with our suppliers.

My own impression thus far is that the most promising option is to have suppliers use corp contracts for small "packs" of, say, 10 ships and 10 sets of modules. (Sets of Tech II guns should have their own contracts, since they're more expensive.) This would allow our suppliers to supply large numbers of ships/mods with less time and fewer contract slots, but still make the "packs" relatively inexpensive, so a Knight leading a gang could put down 20 million isk, supply the gang, and get reimbursed by other gang members.

I like corp contracts, because a supplier can set it up and refill where the most demand is. Knights wouldn't need to run around to various systems and keep the lower-level hangars stocked. Security issues are also minimal, since an infiltrator would need to buy a bunch of stuff at what is basically a fair market price--as opposed to stealing a bunch of stuff for free. Knights with at least a moderate level of earned trust could join the corp and act as mini-distributors without issue, I think.

Suppliers could, but would not need to, pre-fit the ships. Pre-fit ships make things easier on our gankers, but fitting ships is a lot more convenient these days with saved fittings. I've noticed the fitting of ships is never the bottleneck in ganking operations--it's waiting for a scout to get a good target, or for the 15 minute aggression timer to expire. If a supplier wanted to, he could just select a stack of 10 Catalysts, a stack of 80 guns, etc., and hit "create contract".

Alright, enough from me. What are your thoughts?
Posted by MinerBumping at 22:09