The Knights of the Order are a fairly unique organization in EVE. After the barge buff, the suicide ganking of miners in highsec nearly disappeared. Today, there are few other groups who engage in the noble art. And our Knights have been able to do what they do, only because we have an in-depth knowledge of the relevant game mechanics. The entire operation was designed and built from the ground up with these mechanics in mind. The Knights are an example of perfect adaptation. 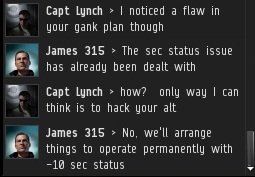 The carebears of highsec didn't know what hit them. 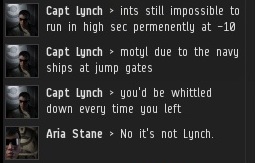 I previously wrote a lengthy explanation of how to move Concord around a system, away from the non-compliant miners they might otherwise protect. Today I'll offer an example, taken straight from Brapelille, our new HQ. 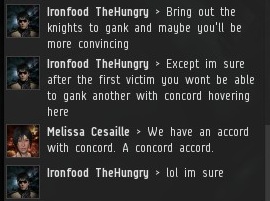 In Osmon, where there are three ice fields, we grew lazy about disposing of Concord. That can't be the case in Brapelille, where there's just the one huge ice-mining belt. Fortunately, it's easy to dispose of Concord after we've done a gank in the ice field. Brapelille, in particular, is well-suited to Concord disposal.

Pictured above, a partial list of the celestial objects of Brapelille, sorted by distance with the nearest objects on top. Sitting at the Customs Office at Planet X, the ice field is the nearest location. If you need to move Concord but don't have aggression yet, get rookie ships and shoot at the Planet X Customs Office. You can shoot at a lot of things to draw Concord, but the way I see it, if you have to shoot something, shoot something you can't undock from.

Shooting the Customs Office will draw Concord directly from the ice field. Remember, it's always the nearest Concord in system who will be drawn. If you have aggression, you can draw Concord by undocking from a station. Let's check out the stations at Planet X.

There are two stations orbiting Planet X, and I'm at one of them. Note that the nearest body to the station is the ice field. That means if you undock with aggression, you'll pull Concord from the ice field, even if you've just drawn some Concord to the Customs Office.

And here's the other station at Planet X. Once again, the ice field is the closest thing to it! So even if you've shot the Customs Office and undocked at the other Planet X station, undocking with aggression here will draw yet more Concord from the ice field. 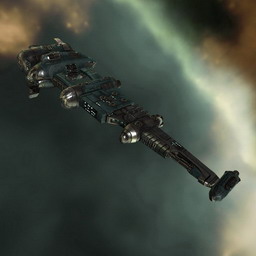 Therefore, there's no reason to despair if there are a ton of Concord sitting in the ice field. A small group of gankers can draw a much larger number of Concord out of the ice field, thanks to the relative positions of the stations and the Customs Office. Indeed, even one volunteer can move multiple Concord away from the ice field, helping his gang out in their time of need. If there are three Concord in the ice field and no one has aggression, the volunteer can quickly shoot the Customs Office and undock from the two stations, and then let his gang do their gank.

This is also handy if you've just hit the ice field but someone in your gang logged off before assisting in drawing away Concord. Simply have your group undock in both of the Planet X stations, one after the other. Two undocks, double the Concord.

Note that undocking with aggression does not reset your timer, so no additional time is wasted. If you're really hurting with a large number of Concord in the ice field, you can rapidly do an advanced technique: Shoot at the Customs Office and undock from both Planet X stations (or skip the shooting of the Customs Office, if you already have aggression). Undock from a more distant station (i.e. one that isn't at Planet X). This will draw Concord away from one of the Planet X stations. Now undock from the newly-cleared station again and pull even more Concord from the ice field! 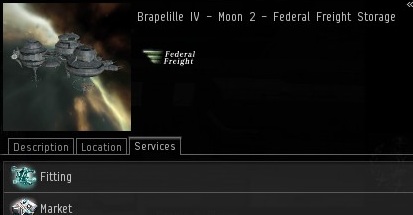 Conveniently, our HQ is Station IV-2 Federal Freight Storage. It's not one of the stations near the ice field. This is because of the rookie ship spawning mechanics. A rookie ship will spawn in any station where you dock in your Pod, if you don't already have a ship in the station. Your Catalysts will be in the HQ station, leaving the Planet X stations empty. This means you can continually undock from our Concord-pulling stations without having to purchase a rookie ship, shuttle, or whatever.

Know your rights! Never let Concord get in the way of a gank again.
Posted by MinerBumping at 18:30