Remember all those highsec miners who thought they would finally be able to defeat the New Order once the new bounty system arrived? This is normally where I would post some links, but I would probably need to link every other post in the blog from the past couple months. But I will post a quick link to the post I made in October, in which I fully explained how the system would actually change things. Few carebears bothered to read it, it seems. 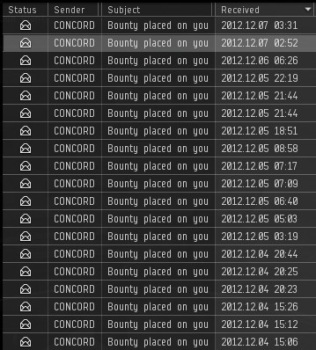 Since the Winter Expansion was put into effect, people have had plenty of fun placing bounties on each other. And our enemies wasted no time in putting bounties on the humble Saviour of Highsec. The notifications tell you who put each bounty on you, but I didn't recognize any of their names. Alts, perhaps?

Within a few days, rebel miners put bounties on me totaling 371 million isk that could have gone toward mining permits. Though you can't game the system like the previous version, this new bounty is arguably less collectible for a bounty hunter. Even if it were possible to destroy my Invincible Stabber, the payout would be something like 16 million isk.

Needless to say, the New Order has been totally unaffected by the game mechanic that was purportedly the rebels' salvation. But it also seems the rebels themselves aren't too happy about the effect it's had on them. Mike Therock Czyngirkas is an inhabitant of the Abudban system. One of our Agents has kept an eye on our old vacation home. It continues to produce miner tears.

Back when we lived in Abudban, Mike used to hurl jibes and insults at us. It was a costly mistake, as resistance to the New Order always is.

These screencaps would need to be stretched a little beyond where MinerBumping wants to go, so we'll use text from here on out:


Mike Therock Czyngirkas > I started playing Eve to help take my mind off my back injury that has stopped me from working and continuing an ordinary life. I have been able to sustain my account through the generosity of my wife.

Just after I retire the "disabled war veteran" Bingo square, comments like these start coming out of the woodwork.

Mike's tears continued to flow. Sounds to me like the bounty system is working as intended, if it's getting people to hunt him down. But why are so many people able to catch his pod in highsec?

Mike likes the word "individual" a lot. I don't know who's putting the bounties on him, but whoever it is, I'm happy to be in a league with him.

Emergent gameplay is a very fine thing. If that's a crime, then I plead guilty as charged!

This comment made me curious, so I looked him up: Mike's been in EVE since October 2011. Possibly he has an older alt, given his earlier reference to "2 years of hard work". He still feels entitled to a safe learning zone. But when you think about it, aren't we helping him learn? After this remark, Sansid suggested Mike move to another system.

Good old Capt Lynch. I'm not familiar of the connection between the two, but it's true that Capt is kind of radioactive. Goon leader Powers Sa made a thread on EVE-O asking for suggestions on players to bounty, which immediately resulted in a quarter-billion isk bounty being placed on Capt Lynch.

I think most honest observers would say highsec only became great when the New Order injected life into it. Rather than engaging in a debate about that, there was medication talk.

I'm not a doctor or anything, but it seems to me that we live in an over-medicated society. We rely too much on pills and too little on the good old-fashioned, commonsense remedies of the past--like bumping and ganking. Let us return to our roots.

Mike's monologue in Abudban local only rewarded him with a new bounty. At this point, he began copy-pasting his bounty notifications into local. I did not recognize any of the names, and the bounties were all for small amounts.

I've come to the conclusion that the bounties probably didn't come from any of our Agents. However, I now consider Sukie Loober, Vaju Enki, and Amon Vess to be friends of the New Order. Let's continue the crusade against bot-aspirancy, in whatever form it may take!
Posted by MinerBumping at 03:00