In my quest to bring peace and love to highsec, I encounter all sorts of people. I also force them to encounter me. The New Order builds connections with players who might otherwise never have contact with anyone else. We don't believe EVE has a single-player mode. Some of the people we interact with are grateful, others less so. But no matter how famous I become, and no matter often people call me a "rock star", I always find the time to read my EVEmail. On occasion, I might even find the time to answer some of them. Join me, won't you?

According to Google Translate, this says "Come on dick jerk, and do not forget to fasten my bubble". shubras: highsec is a distinctly bubble-free zone. No need to anchor any. 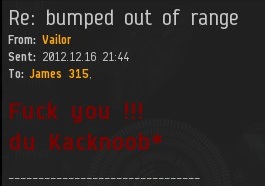 Vailor: Please refrain from the use of colored text in EVEmail. It's hard to read, especially when I screenshot it in JPEG form.

ICE COLD CUBE: You carebears always tell me that either Concord is good for blowing up Knights, or bad for protecting bumper Agents. You can't have it both ways.

Hazmodan Amat: If you have enough self-control to cover your profanity with asterisks, it stands to reason that you could simply dispense with the profanity altogether.

Rampent: I agree with you on the "earthly" point, as I do have my feet planted firmly on the ground. I'm a pragmatist, and my efforts to build a paradise by ridding the galaxy of bots and bot-aspirants reflects this.

Nikola March: No dice. Those people you mentioned haven't said anything about free highsec in quite some time.

RICHARDofSCOTLAND: That's what she said! 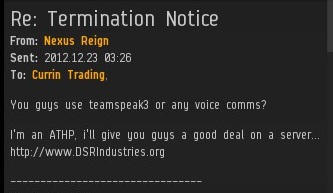 Nexus Reign sent me this EVEmail in response to my notification that our gang killed his ship. To answer your question, we do our fleet comms in text. Some people are unable to speak or listen anyway, and our ganking operations are simple enough to coordinate in chat. 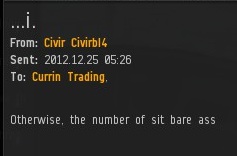 Civir Civirbl4: Nice to hear from you again. But why are you trying to flip me the bird in the subject line with your ring finger?

A Diabetic: Yes, we charge money. But remember, it's the miners who benefit from paying us money. As far as CCP goes, I hope they are aware that MinerBumping has brought them far more subscriptions than they have lost. And the players who join the game are far better than those who leave it. 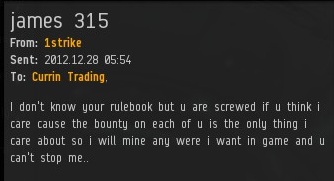 1strike: Yes, James 315 and Currin Trading both have bounties on their heads. James' bounty is over 1.6 billion isk and no one has been able to collect any of it. The only thing I want to know is, how are you going to collect bounties if you're busy mining "anywhere you want in the game"? In any event, the New Order has absolutely no intention of stopping people from mining. We merely require that if you mine in our systems (security 0.5 or above), you follow the Code. That's all.
Posted by MinerBumping at 03:54