Next Stop: Osmon and The Forge

In the short time we've headquartered in Kamio, we have had a devastating impact on our enemies. Non-compliant miners have suffered more than 60 billion isk in damage since our Knights assembled at the beginning of this month. It's time for the forces of civilization to go on the march once again, and liberate a new system. A system at the very heart of botterdom in highsec. 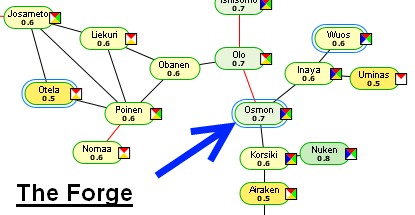 That's right, I'm talking about The Forge region. Home to Jita, it's the capital of highsec and EVE itself. Our focus will be the Osmon system. It's an extremely popular mining destination, and it's home to three ice fields. That's right, you can clear Concord out of an ice field by suicide ganking miners in another ice field.

Osmon is also two jumps from Wuos, a system with two ice fields. Just west of Osmon is a cluster of popular ore-mining systems with 0.6 security. You can also see Otela, an ice-mining system only three jumps from Jita (its 0.5 security makes it much less popular than one might otherwise expect).

Ordinarily I might organize a bumper fleet, schedule it for a particular date and time, and announce our move only at the last moment. However, given the logistical needs of our Knights, I decided to announce our move in advance, publicly, and with a less-definitive timeframe. I would like to see the Osmon system get seeded with Catalysts and gank gear this weekend.

(This would also be a good time to set up insta undock bookmarks for stations in important systems, like Osmon and Wuos. To create one, simply undock in a cap-stable frigate with a microwarpdrive. Set maximum speed and fire up the MWD. Go AFK for awhile and come back to make a bookmark. Obviously not everyone needs to do this, since bookmarks can be copied and shared freely.)

If you need someone to move large volumes of stuff, you can hire Red Frog Freight. I have used them before, and it's easy. On their website, simply enter the pick-up and delivery systems. They'll calculate the cost of transport and tell you how to set up a courier contract to them. After you create the contract, your stuff should be moved within a few days. Risk is minimal, since you can set collateral at 1 billion isk. Push Industries provides the same service, though I haven't tried them yet.

It's also time to begin using New Order Logistics, the corporation of my ganker alt, Currin Trading. If you have participated in a number of ganks for the New Order, you may apply to join New Order Logistics. It has 200 membership slots, which is more than I suspect we'll need for a long time to come.

Remember, the point isn't to get all the gankers into one corp; it's so gankers can accept corp contracts and then distribute ships/gear to their gang without using the open market. If you're a supplier and you think the Osmon market is likely to be compromised/manipulated, you can create private contracts to New Order Logistics to sell ships and equipment at proper market prices. (To save time and contract slots, I recommend selling "packs" of stuff, such as 10 Catalysts and 10 sets of fittings in one contract.)

Putting it all together, it's possible for anyone to seed the market of our headquarters, either on the free market or with corp contracts. With public courier services, it's not even necessary to have your own freighter. This is a useful test for the future. If we're able to set up stockpiles in various systems, our Knights can move freely around highsec in their pods, grab ships, and strike without warning in a wide variety of locations.

Once we can do that, it's pretty much game over for anyone who opposes the Code. Even what little resistance we've seen thus far is dependent upon our being predictable and operating in the same place all the time. Having access to a stash of ships/gear removes the last obstacle to our mobility. For example, if we have a big stash in Osmon and a smaller stash in Wuos, our enemies can't even camp gates. With enough stocked systems, the miners themselves can't easily avoid us by relocating to a different system.

The only way to avoid destruction in highsec will be to follow the Code. As we all agree, that's the way it should be.
Posted by MinerBumping at 17:03