Previously, on MinerBumping... A permit-holder who refused to put a pledge of loyalty in her bio got killed by a ganker gang that didn't know she had paid. She initiated a private convo with one of the gankers, demanded money from him, and repeatedly insulted him. The ganker was Currin Trading. 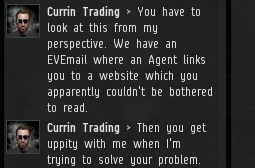 The miner claimed she had evidence that she had been told a loyalty pledge was unnecessary. She produced an EVEmail that simply linked MinerBumping, the very blog on which I write so frequently about loyalty pledges.

alphaliam had never heard of the loyalty pledges before, but claimed to be well-versed with everything on the site.

Out of nowhere, she declared herself the winner of the argument and ordered me to give her money. 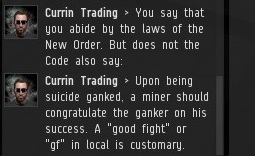 I reminded her that although she had paid an Agent 10 million isk, she was still in violation of the Code for other reasons. 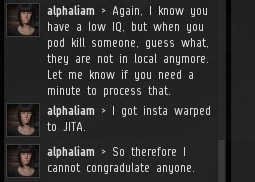 Despite her insult--another Code violation--I chuckled a bit at her excuse for not putting a "gf" in local. Despite the humor, she was dead wrong: She claimed she couldn't congratulate me, the ganker, even as she spoke to me in the private convo.

alphaliam had long since abandoned the next Code provision I quoted to her. 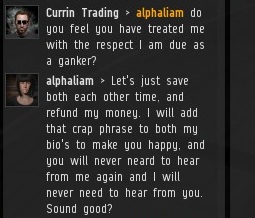 She offered a new deal: She'd put the "crap phrase" on her bio, if I paid her 270 million isk.

I rejected the deal out of hand. We do not pay people to pledge their loyalty to us. We do not hire mercenaries; we accept people who come to us out of genuine belief. If they do not believe, they must change their beliefs. 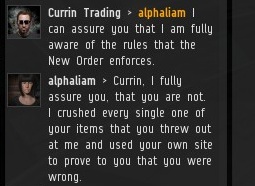 Next, alphaliam accused me of being ignorant of the Code, and declared herself the winner of the argument again. 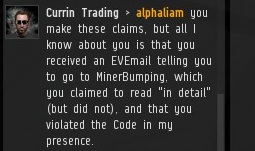 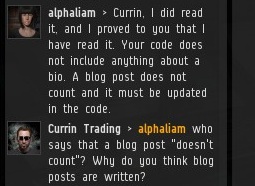 With a casual remark, alphaliam dismissed the importance of hundreds of lovingly crafted MinerBumping blog posts. 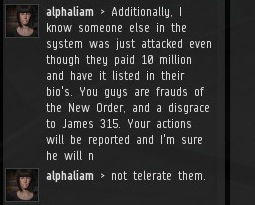 Immediately after claiming she read MinerBumping in detail, she let slip the fact that she had no idea Currin Trading is my ganker alt. I'm pretty sure I've mentioned it on the blog before. And I'm very sure that lying to the Supreme Protector is against the Code.

alphaliam exercised her right to appeal the case all the way to the top. 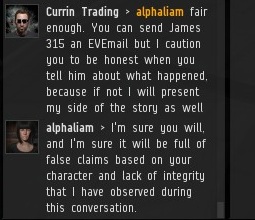 After one final insult, alphaliam ended the convo. I waited for her to send me an EVEmail, but she never did. Her case therefore remains in limbo. But what should other miners take away from this conversation? Must a Code-compliant miner put a pledge of loyalty in his or her bio?

The answer is yes. I could add a provision to the Code stating that fact, but it's not necessary. The pledge requirement, plainly, is already written into the Code. It emanates from the "Please, don't be Goofus" clause. Therefore, every miner should be aware that mining in highsec while not wearing a pledge of loyalty in their bio makes them subject to termination without further warning.

But what about miners who fear retaliation? 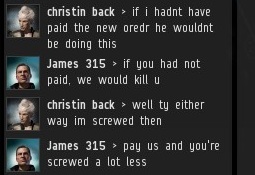 christin back was bumped by a rogue who acted against Code-compliant miners. But she has no cause for complaint. The New Order has destroyed roughly 70 billion isk of non-compliant miner ships and implants. We have also bumped more miners than the rest of EVE combined. We are the greatest power in highsec. If you're a miner and you're afraid about rebels acting against you, don't be. Instead, be afraid of what we will do to you if you violate the Code.

One Order, One Code, One Saviour of Highsec. Make no mistake.
Posted by MinerBumping at 02:49