Princess of the Rebellion

Each time we show up in a system, some kind of resistance movement is created to oppose us. Self-appointed rebel leaders rise up, announcing great plans to finally defeat the New Order once and for all. So far, none of these resistance movements have done anything, or really even tried to do anything. But they're still there!

After a prolonged absence, we returned to Kamio. Maddened by the success of our Knights, multiple rebel leaders have sprouted up. Today, we profile one of them. 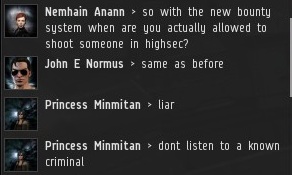 Agent John E Normus was helping a fellow player when he was rudely interrupted by Princess Minmitan. 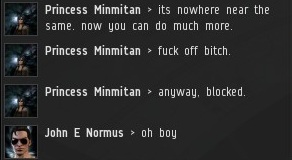 Cue the "Quantum Leap" theme. We've got a live one! 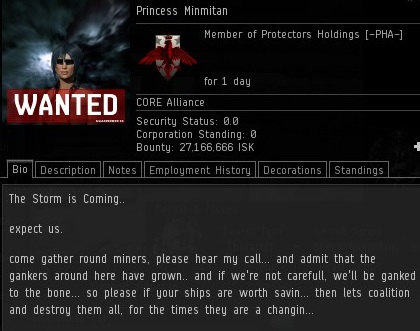 Princess is one of many carebears throughout EVE whose mission is to ineffectually assist fellow carebears in opposing the New Order and other good citizens of highsec. She explained how the new bounty system would allow people to "track" criminals and hire mercenaries. 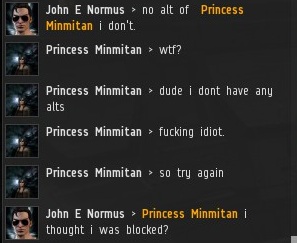 Like many, Princess uses the "block" feature as a weapon.

To be more accurate, she uses the claim that she's going to block people, as a weapon. Why do so many people who use block like to announce in local that they're blocking someone? My belief is that the people who use block are the ones who don't say anything about it, and vice-versa. 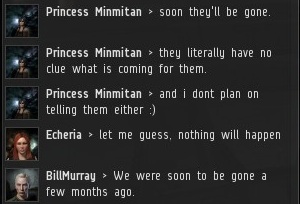 As Princess' confidence grew, she started dropping hints about her master plan to rid Kamio of the New Order. Agents Echeria and BillMurray have seen this movie before, and they weren't shy about spoiling the ending. 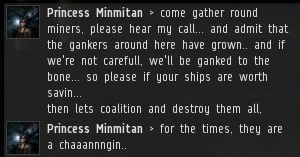 Rebel leaders don't differ from each other too terribly much, but I have to give Princess credit for one original idea: She tried to recruit fellow miners through the use of song. 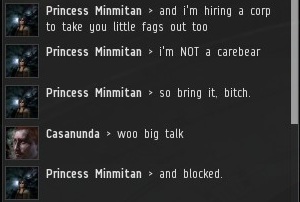 Another rebel leader with plans to hire phantom mercenaries? Agent Casanunda was unimpressed. Let's hope there's more to it than that. 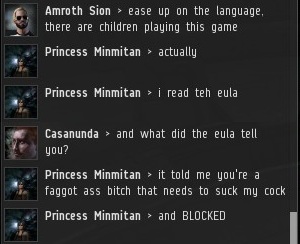 Princess continued her block talk--the most I've seen since IceCruncher. 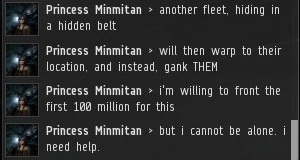 Finally, Princess couldn't contain herself any longer. She enthusiastically spilled the details of her plan. 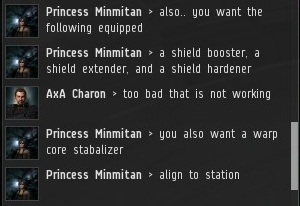 She gave additional counsel to her fellow miners. One such carebear, AxA Charon, was jaded. He had been in Kamio long enough to be burned by the empty promises of smooth-talking resistance leaders before. 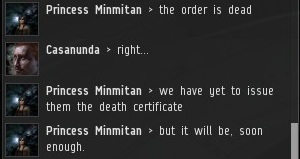 If you're reading this, it means Her Majesty's plan failed. If Leia were anything like this rebel princess, the Death Star would have vaporized half the galaxy by now.
Posted by MinerBumping at 02:59