Reimbursement for Knights of the Order

In my Knights of the Order announcement post, I made a brief comment about my intention to reimburse gankers for their losses with the isk I raised in selling New Order shares. In this post, I'll provide the details on how the reimbursement program will work.

Critics of the New Order have long accused me of running an elaborate scam to bilk our shareholders of their isk. Not so! While most shareholders would describe themselves as having been more than adequately compensated already, I do intend to put the isk to good use.

Originally, I intended to reimburse losses by having people send me links to in-game killmails, which I would manually go through and reimburse by sending isk to each pilot who did damage. However, even in my optimism, I still managed to underestimate the speed with which our army of ganker alts went into action and slaughtered our enemies. (admiral root's tally confirms enemy losses of nearly 40 billion isk already.) Reimbursement cost isn't an issue, but the labor of going through and making multiple payouts per killmail certainly is. So I've decided to simplify things. 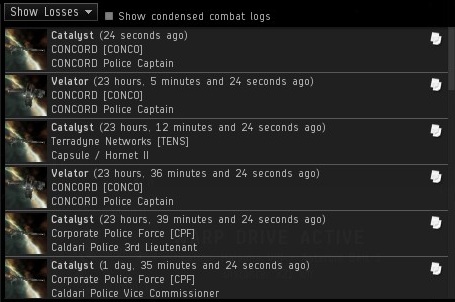 To request reimbursement, simply send James 315 an EVEmail with "reimbursement" in the subject line. In the body of the mail, state the number of Catalysts you have lost since your last reimbursement. Where possible, specify how many Catalysts were tech II fitted or used named/meta guns (I'll be addressing the subject of named/meta fits in the near future). All other Catalysts will be presumed to have used tech I fits. Links to killmails/lossmails are not necessary.

You can send in reimbursement requests at your convenience. Making requests less frequently makes it easier for me, because I will have fewer EVEmails and fewer payments. I'll attempt to do a run through my reimbursement EVEmails once every few days. Reimbursements will be paid as follows:

Reimbursement payments will bring your ganking costs to zero or close enough to zero that the cost is trivial, even if you conduct a very large number of ganks. Now for a few comments about the limitations of this system:

No scamming. The reimbursement program will be done on the honour system. If you're a random reader of this blog and you think you can send in a reimbursement order for a bunch of tech II Catalysts, don't bother. I trust my Agents, though if I get a suspicious order I'll ask for some verification in the form of linked kill/lossmails. Generally, if I'm familiar with your name from seeing you on New Order fleet killmails, I'll trust you. If you're new or operate on a completely different timezone, provide some links of (in-game or API-verified) killmails where you and known Agents are on the same killmail.

Unlike the Goons' old Hulkageddon program, this does not cover everyone who ever shoots a miner anywhere in EVE; it only applies to New Order Agents who kill miners in the name of the Code. (On the other hand, the reimbursements here will be somewhat more generous, since they apply regardless of who got the killing blow and can cover Catalysts lost in failed ganks.)

The key here is to remove limits on ganking. If your ganking costs would take enough of a chunk out of your wallet to make you "feel" the cost, let us reimburse you. Also, consider this example regarding tech II Catalysts: If your gang is confident of its DPS without your having to go tech II, then use tech I. On the other hand, if you think it would help your gang for you to use a tech II fitting, but you find yourself calculating how much it would cost to do too many tech II ganks--you are "feeling" the cost. That's a case where our reimbursement plan will help.

Ideally, all Knights of the Order should be completely unconcerned about how it will affect their own wallets to go on killing every Code violator they meet. If you get Concorded and immediately return to station to fit out another Catalyst without thinking about it, then things are working as intended.
Posted by MinerBumping at 19:18