Tears of the Ganked

In the official announcement about the Knights of the Order, an army of dedicated suicide gank alts, I reflected on the difference between the emotions inspired by bumping versus ganking. I also reminded everyone who ganks in the name of the New Order to notify their victims of the reason their vessels were destroyed. These are not random acts of violence; they are justice for the Code.

For that reason, I always send an EVEmail to the miners I gank. And if I see someone has been ganked in my name, sometimes I'll send an EVEmail even when I wasn't one of the participants--just to make sure no one falls between the cracks. 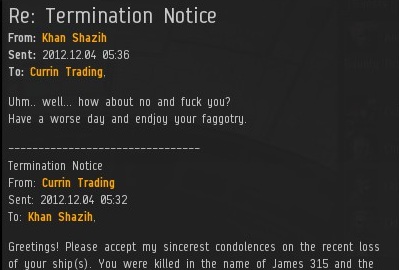 Khan Shazih was one of the first Mackinaw pilots who came under fire from the Catalyst of Currin Trading, my ganker alt. Khan got right to the point. After the Winter Expansion, he made his kill rights on me available for 1 isk. 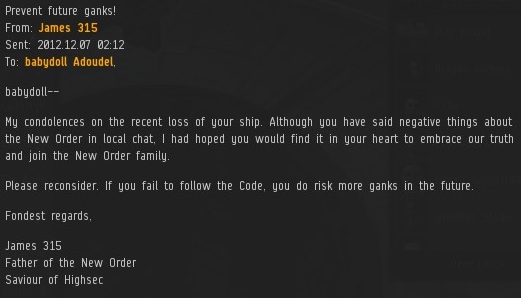 I observed babydoll Adoudel's Mackinaw being destroyed in Kamio. She frequently misbehaves and speaks ill of the New Order in local, so I sent her a nice note and taught her how to avoid being ganked.

I was surprised by the degree of ingratitude she showed me. No good deed goes unpunished, it seems. 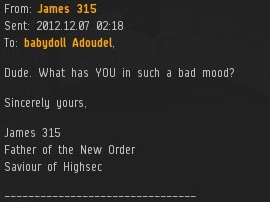 Maybe it was the destruction of hundreds of millions of babydoll's isk that made her so sour. I just don't know.

babydoll made an empty threat about ganking me. Maybe threats like that go over better when made against the vincible.

I always leave the door open for a future partnership. If highsec is to achieve 100% Code compliance, there can be no grudge-keeping.

Another empty threat! How disappointing. One more reply to set her straight.

After that, babydoll ceased her correspondence with me. She failed to send in her money and her apology. I checked her bio, and there was no pledge of loyalty to be found. I just hope she comes to her senses before the next gank occurs.
Posted by MinerBumping at 18:42