The Education of Brim Wilf, Part 1

When I bump miners, I bump them with a purpose. When I gank miners, I gank them with a purpose. In contrast to the random killings of the past, our Knights follow a Code. We only kill those who deserve it. Ganking is not merely a military action or an act of terror; it is a political act. Therefore, I always send an EVEmail to every miner I kill, explaining exactly why they were killed and how they can avoid death in the future. It is a simple courtesy, but I consider it to be one of the most important things I do. 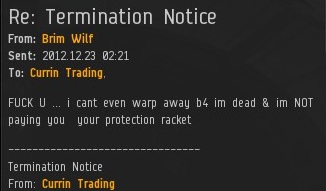 My kindness is not always repaid with kindness. Brim Wilf, an Osmon ice miner, sent me a nasty reply. He was upset about being killed, and apparently he was really upset that he couldn't warp away. It's called a Warp Scrambler, dude. It ain't no crime. 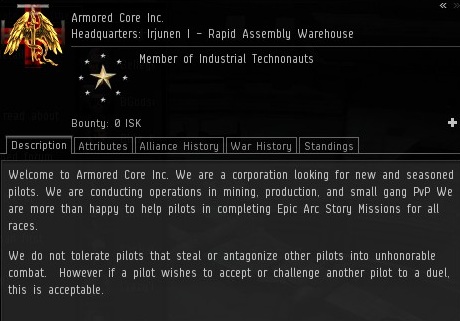 Armored Core Inc. wasn't a random corp, it was Brim's employer. For once, the corp description was useful: The line about "unhonorable combat" told me all I needed to know.

Nearly half an hour after Brim sent me his angry EVEmail, I was still on his mind. He placed a 10 million isk bounty on my head--an amount that would have bought him 365 days of blissful mining under New Order protection. 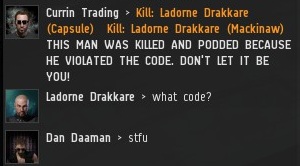 As is proper, I announced to the good miners of Osmon that one of their own was executed for violating the Code. Some people say we don't give the miners enough warning. Those people obviously haven't watched local chat in any of our active systems. Ladorne Drakkare bristled, claiming ignorance. Really? You play EVE and you've never heard of the Code? MinerBumping is too popular a blog for people to make that claim now. All miners in highsec are deemed to be fully aware of the Code and its precepts.

As the New Order and its supporters celebrated each non-compliant miner's death--like the birth of a healthy child, really--Brim appeared. He was still fuming, and threatened to take a self-destructive dive into Red Pen Land.

Brim was at his wit's end. He had not realized his ship could be destroyed in this game. 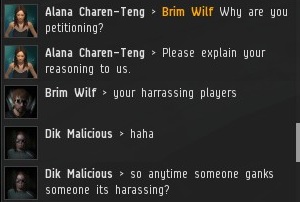 That's right, carebears think shooting spaceships in a spaceship game should be petitionable. They think they should have a right under the EULA to be able to grind space money in peace. No pew-pew allowed. 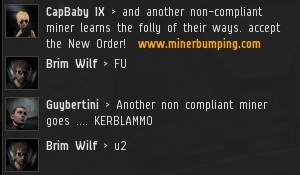 Brim was such a downer in local. The mood in Osmon was getting to be a real drag, so I tried to cheer everyone up by educating them about the fate of another Code violator. Even this couldn't lift Brim's spirits. He was inconsolable. 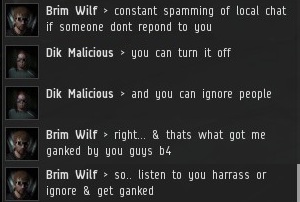 Having hit rock bottom, he confessed his crimes. Brim had ignored local, which led directly to his destruction.

I accentuated the positive. The rulers of highsec are not elitist: We want everyone to join the New Order family. In fact, we require it. 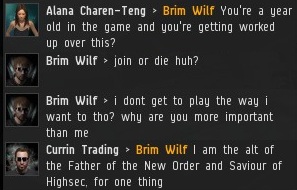 Now we get right down to the core of things. Brim fully bought into the classic carebear paradox. To them, a "sandbox" game is one where carebears can do whatever they want, but no one else can do what they want to the carebears. Their vision of a "sandbox", stripped of all disguise, is a single-player MMO, a paradox of a game that no sane person would want to play.

Brim is not alone. He, like so many others, sleepwalks his way through EVE without even realizing he's wrong. But the New Order is here, and we mean to bring change. Waking people up is our business. Could we talk sense into Brim Wilf, before it was too late?

To be continued...
Posted by MinerBumping at 03:35