Every Miner Teardrop Has a Story

You have probably noticed a lot of new faces lately. By "new faces" I mean faces that are literally new, having been generated within the past couple weeks. It's the miracle of the ganking alt! So many Agents have made them. R0me0 Charl1e rolled ganker alt Echeria, whose bio is quickly filling up with killmails.

I recognized the name of one of Echeria's customers, Kytren Virpio. Kytren sent me this nice EVEmail out of the blue:

I knew there had to be a story behind it. And there was! R0me0/Echeria told me the story of Kytren. I now share with you the story, told in our Agent's own words:

Today I had the fortunate event to meet a fellow miner called Kytren Virpio. Like countless miners before him, he mines ice without a permit. But we, Knights of the New Order, kind capsuleers of EVE, decided that we would come and say hello our own way.

After removing Kytren from his Retriever and also his pod, I contacted him to let him know the customs of the New Order territory. Well this little miner decided to private convo me to find out about this system we call home. 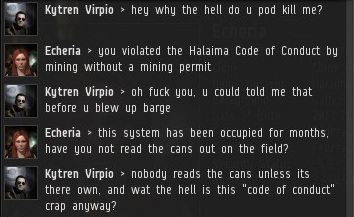 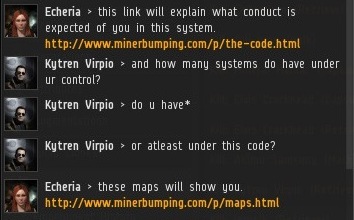 Next Kytren ask how much of EVE we influence. That was an easy one to respond as we have plenty of maps that show the progression of the New Order territory. 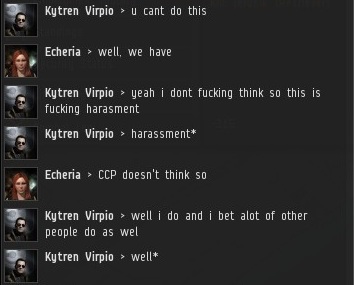 At this stage Kytren called foul play and accuse me and my team of harassment. Well as we all know suicide ganking has been a staple part of EVE since the beginning, it isn't EVE if you can't shoot a ship at any time, whatever the consequences. Plus this isn't the first time that the New Order has been accused of harassment, yet we are still here, ever so strong.

The fact is that we do change the behaviours of miners like Kytren. They pay their 10 mil isk mining fee and they are free of the shackles of bot-like behaviour and free from the grasp their isk has them under. They need this, hell i'll be as bold to say EVE needs this.

But Kytren, I want you to remember this. I want you to learn from this mistake and become a better person out this. You just need to submit a 10 mil mining fee. It will make you feel so much better about yourself. You are not beneath redemption, you can strike out in this cold dark universe we call New Eden and make something out of yourself instead of becoming part of the floating metal hulls that circle around the fields of ice, being one with the background, so obscure that people think that you're a NPC instead of a real person. I know there is person inside that mining barge, trying to fight out, trying to free himself. You just need to let him go.

But I needed to quickly reply so I gave him the heavily condensed version.

*sigh* It'll take some time, but Kytren will break away his chains and join us. It's the only way to be free.

Our Agents graciously bump, gank, and otherwise correct the miners of highsec. They are the enforcers of the Code. As you can see from R0me0's story, our Agents are also the best ambassadors anyone could ever ask for. Until the day that all highsec recognizes the Code as law, let our Agents' lights shine bright!
Posted by MinerBumping at 03:49