The New Order has a powerful ideological appeal. It's one that can turn enemies into the best of friends. On more than one occasion, we have profiled rebels and skeptics who became strong supporters of the New Order. 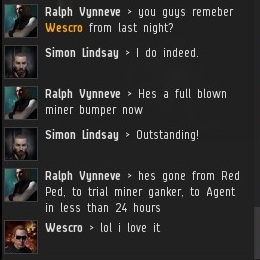 Some may be surprised to learn that Wescro, for example, was once on the dreaded Red Pen list. But now he's one of the most prolific gankers in the New Order, with countless kills to his (alt's) name. It's more evidence that while our enemies think we're warmongers, the New Order is really about peace. 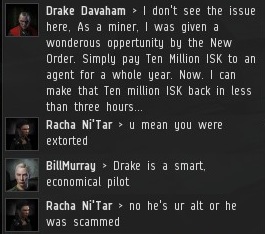 The New Order has also been a boon to the economically rational miners. 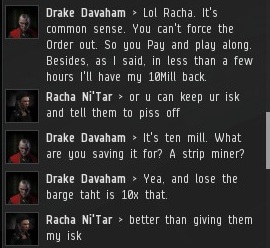 Note the confusion that plagues the mind of Racha Ni'Tar. She would rather pay ten times a permit's cost to some random barge seller than pay a mining fee to an Agent. She has her space pride, but as a highsec ice miner who cries about the New Order, who is she trying to impress?

Meanwhile, Shufly would gladly get his ship blown to bits, because if he mines for it himself, it's "free". Buying a permit would be an insult to his "credibility". Remember kids, buy your ore from a credible miner like Shufly, not those New Order collaborators putting sell orders up in Jita! 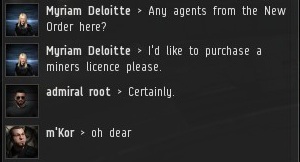 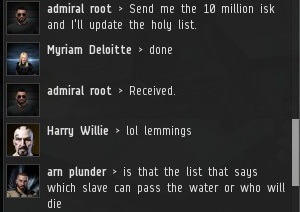 When a rebel does see the light, other rebels whine about it. Rebels may be foolish, but they've got one thing right--the more miners who switch to our side, the more likely the rebels will be forced to submit, too.

Harry Willie is a self-proclaimed leader of one of the new rebel movements. So far his heroic resistance consists of complaining in local and predicting the New Order will one day be revealed as a scam. According to Harry, someday all the Code-compliant miners will be ganked by the New Order. So the scam is that at some undefined point in the future, the permit-owners will be no worse off than the rebel miners are now. Epic scam, that.

Myriam Deloitte's conversion brings up an interesting point. As the New Order comes and goes, rebellious miners and bot-aspirants move around. But each time we return to a place, the resistance diminishes. It's like a lowering tide that recedes a bit more each time it rolls back in. Never believe a miner who says he'll "never" pay. With time, they all do. 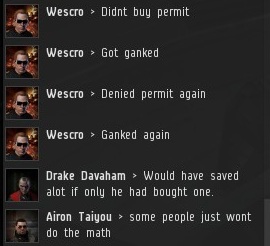 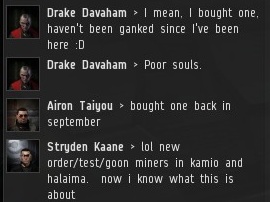 Which miners are winning the debate, the permit-holders or the rebels? It's easy to compare the intelligence of the two groups. Among rebel forces, a new conspiracy theory is taking root: An Axis of Evil comprised of Goons, TEST, and the New Order is taking over highsec to control the mineral market. That's their big argument for why people shouldn't buy permits.

It's also interesting to note that you don't often see members of the New Order switching sides to the rebels--it's always the other way around. The more contact one has with the New Order and its glorious Agents, the more likely one is to become enthusiastic about it. Just a few months ago, who would have imagined people having a positive outlook on the future of highsec?
Posted by MinerBumping at 04:03