Nearly five months ago, I declared I was taking command of the ice field in Halaima. Since then, my Agents and I have been endlessly threatened and conspired against by our enemies. For some reason, though, the Big Attack never seems to occur. 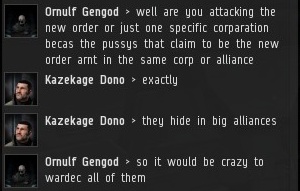 Two carebears plotted in Kamio. They shared complaints about the New Order's Agents hiding in big alliances. Wait, weren't they just recently complaining that we're all in NPC corps? Conditions are never quite right for war.

Even so, Kazekage Dono threatened to put a gang of Thrashers together to take down our bumping ships once and for all. His secret weapon was the knowledge that rig drawbacks limit our armor. Most of our bumpers are shield tanked, but I guess it doesn't matter, since the Thrasher gang never showed up. 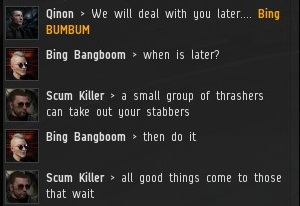 Scum Killer, a member of the illustrious To The Stars corp, likewise threatened to send a Thrasher gang to destroy our bumpers. 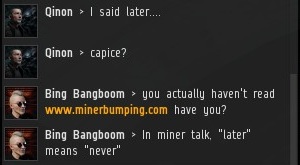 Meanwhile, perpetual whiner Harry Willie had high hopes that the rebel forces, the "New New Order", were only delaying their attack while they set up a bunch of bookmarks. They must have libraries full of the things by now. Perhaps "busy setting up bookmarks" should be added to the lexicon of EVE excuses, like "testing response time", "loss has already been replaced", and "I mined it myself so it was free".
Posted by MinerBumping at 19:11