If you're a Knight of the Order, you know how our gank fleets operate. You've seen the undock countdowns, the warping to insta undocks, and the Concord manipulation. You know most of what there is to know about commanding a gank fleet. However, many pilots are shy about taking responsibility for a fleet, particularly when there are murky areas of game mechanics that they haven't seen firsthand.

The purpose of today's post is to shed some light on what FCs see, that the other members of the gank fleet don't see. By removing a little of the mystery, hopefully more Knights will have the boldness to take a gank fleet out for a test drive. Remember, the more potential FCs we have, the more likely it is that at any given time we'll be able to field a gank fleet. 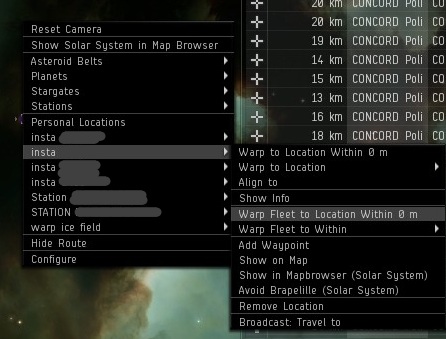 After undocking, the FC fleet-warps everyone to the insta undock bookmark. I like to have a few different instas in my collection, just in case one ever gets compromised. As you can see, the FC's warp interface is only a little different from the standard one. Just select "Warp Fleet to Location" instead of "Warp to Location". Yes, it's common for new FCs to accidentally click "Warp to Location" out of habit, which will cause the FC to warp off by himself. No big deal, just abort the mission and go back to station. Also, sometimes you may be Wing Commander or Squad Commander instead of Fleet Commander. Same interface, it will just say "Warp Wing to Location" or "Warp Squad to Location". 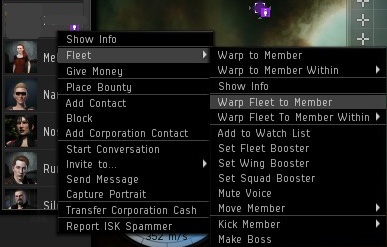 After landing at the insta undock location, the FC fleet-warps everyone to the warp-in. This is a little different: Instead of right-clicking in space, you right-click the member of the fleet that you want everyone to warp to. The options are nested under "Fleet". Select "Warp Fleet to Member" and you're good to go. Once again, don't select "Warp to Member", or you'll warp off without your fleet. 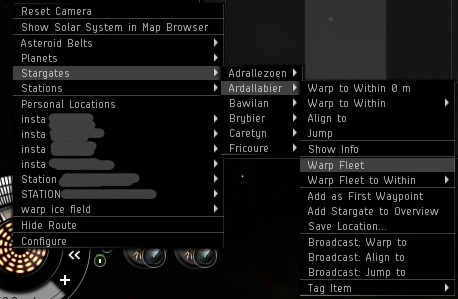 If your gank fleet is heading to another system, the fleet warp is performed as pictured above. That's all there is to it. From a game mechanics standpoint, this is the only special thing an FC does. Instead of waiting for someone else to fleet-warp you, you're the one who selects "Warp Fleet" from the menus.

A more important job for the FC is making the call whether to attack a particular target or not. Our scouts scan the fittings of Code violators and report what their tanks look like. Our Knights "x up" with DPS. Now you just need something to put those two things together. 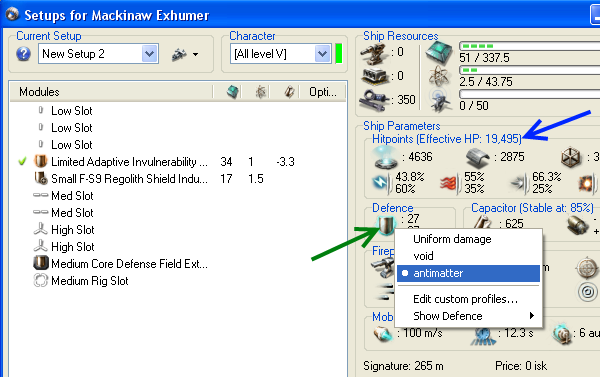 I've previously written about EVE Fitting Tool (EFT), which can be downloaded at that link. If you load up a Mackinaw, Retriever, or whatever, you can set Character to "[All level V]" and see what the target's maximum EHP is, after plugging in their tank modules. But you'll want to set a "damage profile" by right-clicking where I put the green arrow. If you don't have one set up, click "Edit custom profiles..." 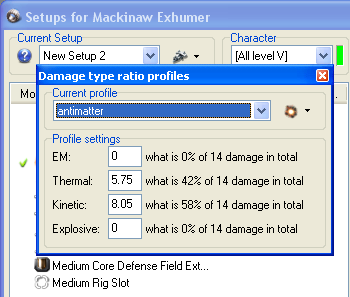 The damage profile I created is for Caldari Navy Antimatter, our standard ammunition. You can either put the numbers I listed, or just use 42 for thermal and 58 for kinetic. Our ammunition doesn't use EM or explosive damage. The reason damage profiles are important is that otherwise the EHP will be based on the four damage types averaged together. Also, our enemies often use tank modules that boost resistances specifically to thermal damage.

The target's "Effective HP" (next to the blue arrow on the earlier picture) tells you how many hitpoints the target has, adjusted for resistances. Now it's up to the FC to decide whether the gank fleet is likely to take down the target. Add up your fleet's total DPS (including your own). Then multiply it by 15, if Concord is pre-spawned. That will give you an estimate of the maximum possible damage your fleet will inflict in a 0.7 sec system.

For example, suppose your fleet has a DPS of 1,800. On paper, you can deal about 27,000 damage. However, that's on paper. If your target's EHP is near 27,000, you may not be able to kill the target; someone could accidentally forget to overheat, or have trouble locking the target, or miss the fleet warp, or go AFK instead of undocking, or have any number of problems.

I always like to leave some room for error. Besides, you'll need a little overkill if you want enough time left over to get the target's pod.

Bonus content! Here's some random tips that can apply to anyone, to reward you for reading this far. Remember how I mentioned Caldari Navy Antimatter? Well, for some reason, there's an ammunition not listed on EFT that's equivalent to it: Federation Navy Antimatter. It's often available when Caldari Navy is sold out, and it's usually cheaper, too. They inflict the exact same damage. 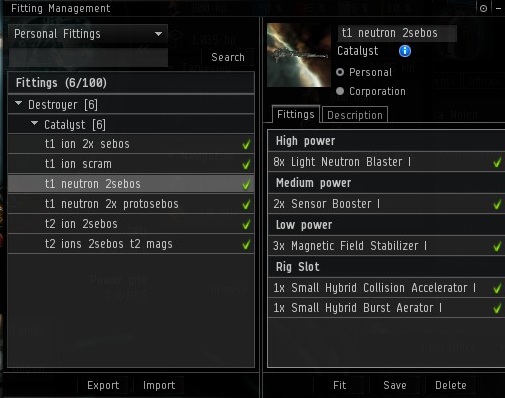 If you haven't saved fittings, do so. It makes refitting after your Catalyst gets blown up a lot easier. I have multiple fittings saved, including one that uses Prototype Sensor Boosters, since--like Federation Navy Antimatter--it's often cheaper and available when my regular option is sold out. 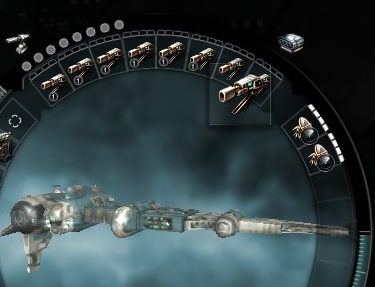 Another handy fitting trick: You can group guns while docked. Hold shift and drag a gun onto another gun. The "1" appears, indicating they're in group one. Drag each gun onto another gun with a "1" until they all have a "1". The reason this is useful is that you can load all the guns simultaneously with one drag of ammunition, rather than having to load X bullets into each gun, one at a time. Sadly, it's not possible to save groupings or ammunition in your fittings list. Get on that, CCP! 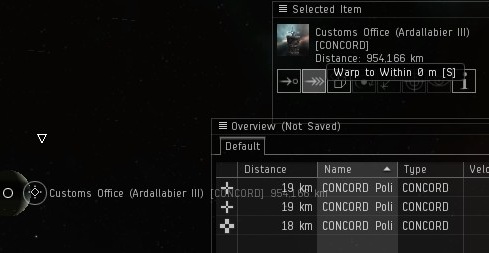 Lastly, saving your pod. If you know you're going to be Concorded, select a planet or customs office so that you can spam the "warp" button and get your pod out safely. This is easiest when undocking in a rookie ship to pull Concord. When you're in the middle of a gank and preoccupied with killing the target's ship and pod, it's harder. But if you remember where a planet is located on your screen, you can quickly click on it and start spamming warp when the police arrive. It's not possible to save your pod 100% of the time, but doing this makes it much more difficult for a vulture to catch you.
Posted by MinerBumping at 19:37