It's no secret that miners are very protective of their "right" to AFK mine, use bots, and commit other violations of the Code. When bumped, some miners lose all reason.

I recently received a tip about someone attempting to gather real-life information about me. Apparently this is called "doxing".

Of course, this wasn't the first time a rebel miner had threatened to investigate MinerBumping to find some out-of-game means to defeat the Saviour of Highsec. 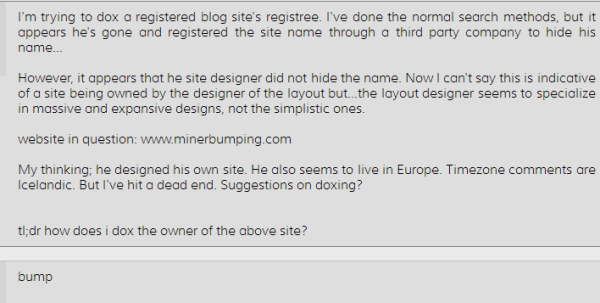 Despite the anonymous miner's best efforts, he was unsuccessful. In fact, he didn't appear to realize MinerBumping is hosted by a standard Google blog engine. His fellow hackers and doxers didn't lift a finger to help him. The only reply to the thread was the OP "bumping" it. Appropriate! 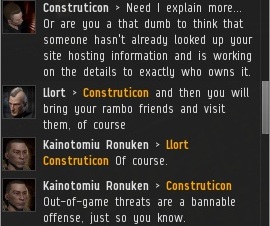 Infuriated by our expansion into Abudban and finding our Stabbers Invincible, Construticon also went the real-life route. 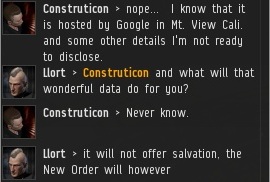 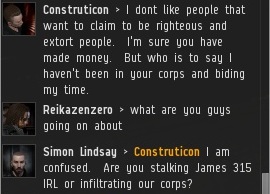 Of course, attempts to gather or disseminate real-life information information about EVE players is, unlike bumping, a violation of the EULA and punishable by permaban. But for those miners truly passionate about AFK mining and botting, they feel it's worth the risk.

On occasion, a miner will devise a plan to inflict real-life harm on your humble author, such as Lucion Jaxx's plot to assault me at Fanfest in retaliation for my bumping his Hulk.

Doxing seems a futile effort. Were I to run for CSM, some of my personal information would become public anyway. For those who are interested in learning more about me, I recommend the EULA-friendly About section on this website.
Posted by MinerBumping at 18:19