The New Order focuses on the ice fields of highsec. There are far fewer ice fields (for example, the entire The Citadel region has only three), and the permanent nature of the ice chunks encourages bot-aspirant culture. 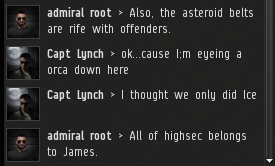 Nevertheless, asteroid belts and ore miners fall squarely within the jurisdiction of the New Order. The Code is just as relevant to them as it is to the ice miners. 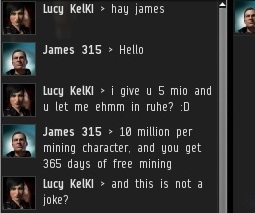 Just yesterday I was patrolling the asteroid belts of Abudban when I caught a group of people mining without a permit. Lucy KelKI invited me to a private convo after I took action to shut her mining op down. 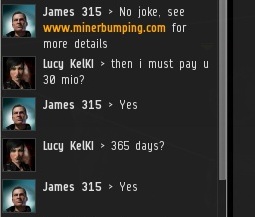 A lot of miners don't know the asteroid belts belong to the New Order, but they are eager to learn. 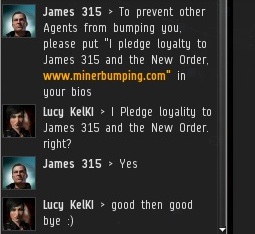 A few loyalty oaths later, Lucy's mining op was back on track. In my experience, ore miners might be a bit more willing to accept the Code than ice miners are, simply because ore mining is a bit less bot-aspirant. I wouldn't start throwing the ore miners any ticker tape parades, though. They need the Order desperately. Often, our most vocal detractors in local chat can be found mining in the ore belts, where they think they are exempt from our love and attention. 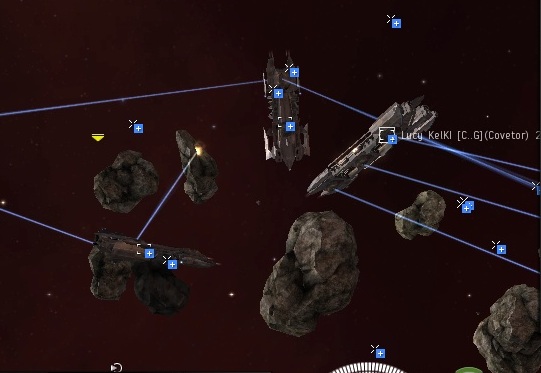 So if the ice field is running low on miners, or if you're just looking for a little change of pace, give the asteroid belts a try. With any luck, you'll make some new friends. Look at that happy mining op. Code-compliant miners light up the belts like a Christmas tree!
Posted by MinerBumping at 20:57