It is a truth nearly universally acknowledged, that it is economically rational for miners to buy mining permits from the New Order. 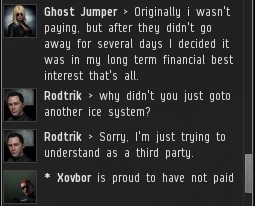 The reasoning is simple: Over the course of the permit's 365-day period, bumpers will cost you more than 10 million isk. If miners mine for the money, it makes sense to pay.

Yet the same rebel miners who eschew pride and principle by becoming ice-mining bots in highsec--whose choice of activity is the very antithesis of pride and principle--nevertheless appeal to those concepts to justify their rebellion.

Ghost Jumper offers us the picture of a rational miner. She mines for money, and makes the choice that maximizes her money. Paying for things is the norm in EVE. 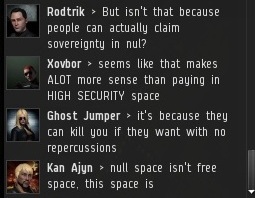 Sovereignty has nothing to do with it; players cannot claim sovereignty anywhere in lowsec or in NPC null. What about the counterargument that nullsec or even lowsec "ownership" is backed up by guns? It's also possible to kill miners in highsec. But more to the point, bumpers inflict economic damage on miners without Concord interference. The endless tidal wave of miner tears posted on MinerBumping are a testament to that fact.

Which brings us to the final point: All miners do pay. If you lost 10 million isk from bumping, you paid--you just didn't get credit for it. The miners who say they'll "never" pay have already lost their money. Unlike their smarter counterparts, they don't get the benefits of joining our civilization--until they purchase their permits. Being a rebel miner doesn't mean you don't pay, it only means you pay more. And if they are so proud, why do they shed so many tears?

The power of the New Order comes in many forms. Truth is one of these forms. There's no logic or reason for non-compliance. Therefore the New Order is reality. You can complain about reality, but you can't wish it away. Given enough time, our triumph is inevitable. How do you defeat the truth? With a smartbombing Merlin?
Posted by MinerBumping at 02:29