During the waning days of our Gallente vacation, I happened upon a non-compliant miner in Aydoteaux. Pretty much everyone else had paid for a permit, but MoltenFury was running late.

I try to frame Code-compliance as a positive thing--as an opportunity. Some people will open the door when opportunity knocks. With others, opportunity must bump down the door. 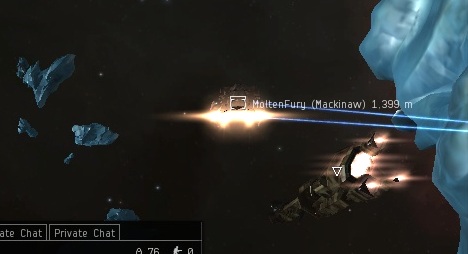 MoltenFury repeatedly returned to the ice field. He eventually stopped giving me the carebear stare with his Mackinaw, but he gave me the silent treatment. Suddenly and without warning, I received a request for a private convo. Was he ready to pay? 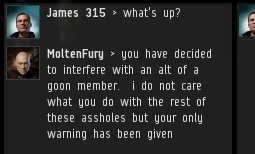 No, it was only the "Powerful friends in nullsec" line from Miner Bingo. If I didn't stop bumping him, the entire GoonSwarm Federation could be enlisted against me! I wanted to reason with MoltenFury by reminding him that his threats were totally empty, but he abruptly left the convo before I could get a word in. 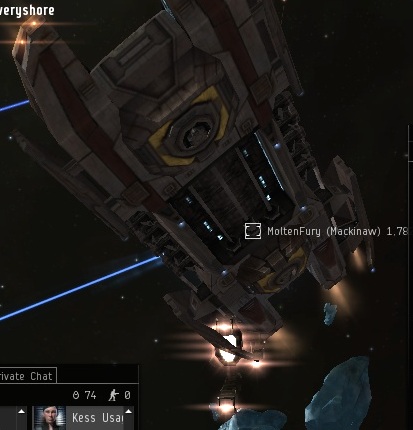 When words fail, bumps succeed. Through my actions, I attempted to demonstrate that I knew he was nothing but an ordinary highsec ice miner with no powerful alts or friends at his disposal. 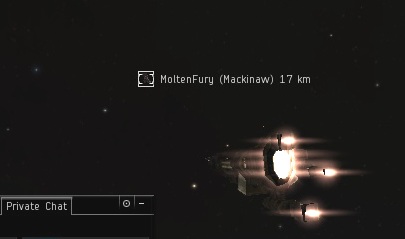 MoltenFury sailed off into the night, never to be seen again. It's a funny thing, in all our months of bumping miners, we have yet to encounter anyone who can actually summon allies from nullsec to come attack us. Rebellious miners, you have been abandoned by your so-called "friends"! Join the New Order, and you will have a family that will never let you down.
Posted by MinerBumping at 17:53