Previously, on MinerBumping... My corp, the Experimental Fun Times Corp, is undefeated after five wars. Highsec learned its lesson, and we experienced a long period of peace. But when Captain Worthless threatened to end that peace, Literally Space Moses suggested I find out just how deep the rabbit hole of broken wardec mechanics goes... 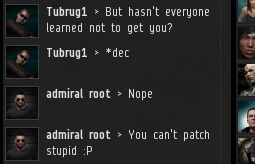 Captain Worthless' corp declared war against me. In total, my enemies have spent 300 million isk declaring wars against me.

Captain proudly announced he would soon have reinforcements from his powerful friends in nullsec, who would be added to the war as allies. 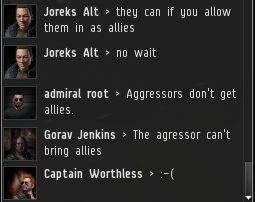 ...Unfortunately, Captain wasn't aware that the aggressor in a war doesn't get the option of calling in allies. It's just as well, though, since powerful friends in nullsec have a tendency not to appear or exist. 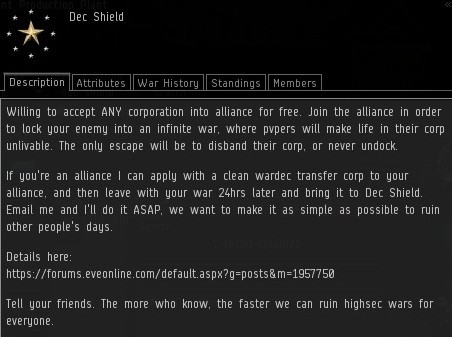 At the suggestion of Literally Space Moses, I took a look at the Dec Shield alliance. They seemed like nice people. 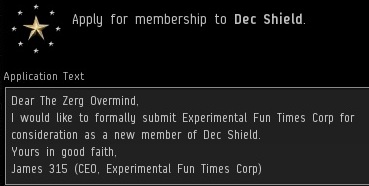 The membership application looks like something I might write, but it's just the default message you send when applying to join an alliance. 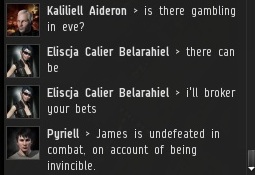 As I sent in Experimental Fun Times Corp's application to join Dec Shield, the Abudban locals speculated on the outcome of the war. 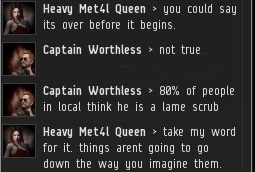 Captain was bullish about his prospects, but Heavy Met4l Queen poured cold water on his optimism.

Though many would credit my victories to my immense skill and bravery in combat, I think it's my honour, honesty, and integrity that got me to where I am. When word got out, old wounds were opened. gallean mento, an alt of brichardi, complained about how I defeated him in a previous war. It was Experimental Fun Times Corp's first war, all the way back in September.

As a consequence of my joining Dec Shield, Captain Worthless' corp got pulled into a war against the entire alliance. 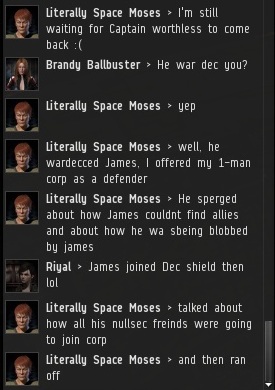 Because Captain's corp was the aggressor in the war, Dec Shield was able to lock him into a permanent war by setting it to "mutual". Instead of a one-week war with my one-man corp, Captain now had a permanent war with several hundred people. Luckily for Captain, CCP is very aware of what Dec Shield is doing. In the next expansion, aggressors will have the ability to escape mutual wars after a time. But until then, Captain is at war with Dec Shield.

Of course, as part of Dec Shield, I was at war with all of Dec Shield's hundreds of opponent corp/alliances, containing many thousands of pilots.

I had a lot of wars to win now. Hundreds of them. They might've had the numbers, but I had heart. 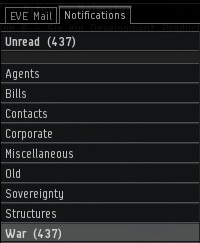 First I wanted to clear my ridiculous notification folder. 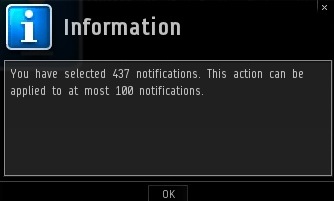 Yes, for some reason there's a limit to how many notifications you can "mark as read" at once.

With all the paperwork done, I dissolved and immediately recreated Experimental Fun Times Corp, clearing away all those silly wars. The corp is getting into a rhythm now. Six wars declared against us, six victories. And with each war, my enemies senselessly throw away another 50 million isk.

As for Captain Worthless? I haven't seen him, but presumably he's still having fun with Dec Shield. His friends in nullsec never did show up, though. War. War never changes.
Posted by MinerBumping at 03:24