You Will Know Them by Their Code

The rapid explosion of the New Order's popularity and the skyrocketing number of Agents are both very good things. But with our rise come also the jackals. Fake "Agents" and fake "Saviours" will invariably pop up, hoping to profit from our good deeds.

Socket Closed has made a name for himself--such as it is--by bumping miners who comply with the Code, and occasionally by impersonating an Agent of the New Order. How can you tell the difference between a fake "Agent" and the genuine article? It's simple. If they follow the Code, they are true Agents. Otherwise, they are not.

Clearly, Jimmy 426 does not show proper respect for the Code. Do not be fooled! 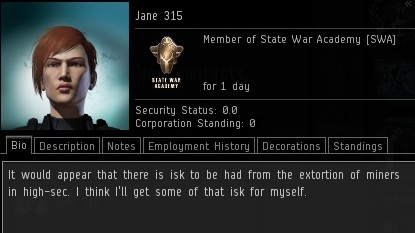 Jane 315 may bear a passing resemblance to the Saviour of Highsec, but is she a true Agent? It depends on whether she follows the Code or not. Judge by actions, not appearances.

Our old friend, one of the False 315s, is at it again. Try as they might, our enemies can never replicate our success. There's no substitute for courage, honour, valour, integrity, honesty, and all those other things we represent so well!
Posted by MinerBumping at 17:48

Email ThisBlogThis!Share to TwitterShare to FacebookShare to Pinterest
Labels: Intel, Philosophy, The Code