Confessions of Some Botters

I was helping out in Tolle the other day when I happened upon a group of botting ice miners. 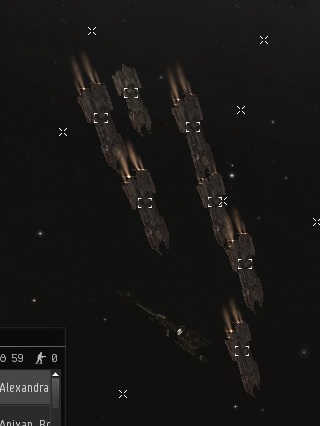 Agent Tubrug1 confirmed to me that the group stuck together by following one of the miners (the "anchor"). Since the anchor was knocked out of range, all the rest of the bots had to go out of range, too. 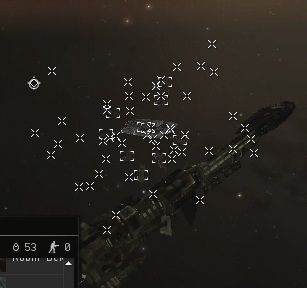 Sometimes AFK miners will set up anchors, but after the cycle ends, the human operator returns to keyboard and angrily sends his flock back into range. Botters, on the other hand, don't return to keyboard at the end of a cycle--that's the whole point. 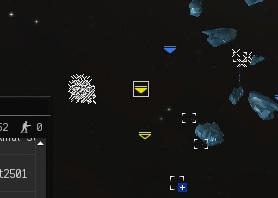 So the bots sat out of range, doing nothing all day. Many bots are only programmed to return to station or whatever and repeat the process once their ore bays are full. If they're bumped out of range, the ore bay never fills. Pinocchio is broken; his strings have been cut. 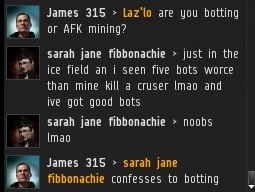 It used to be that botters were afraid to make themselves known. But the rise in AFK mining due to the exhumer buff (particularly the giant ore bay for mackinaws) has normalized botting culture. Miners now openly discuss becoming bots. It's mainstream.

How do botters justify their behavior? They feel CCP wants them to have an easy time AFK mining in highsec. Botting is just slightly more AFK. Nobody gets hurt. 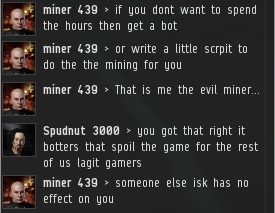 Of course, we of the New Order know better. The future of EVE either belongs to humans or to the machines. The New Order will always stand with humanity. Will you?
Posted by MinerBumping at 19:11