We've had some fun with Google Translate, using it to converse with miners who don't speak English. But what happens when the miner is the proactive one? I recently encountered Jacob Amaris, a German miner who took the initiative to translate his complaints about bumping into English. 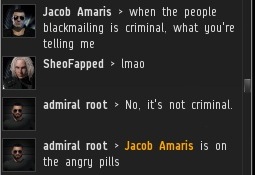 One good thing about Google's German translation: He can't quite hit us with the word "extortion".

Jacob calls for a massive protest on EVE-O against the New Order. I'm sure Jacob is a charismatic rabble-rouser in his native tongue, but it's hard to rally the troops with English this broken. 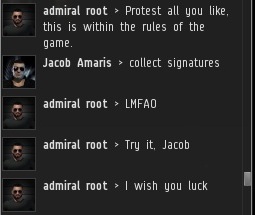 No signatures were collected that day. 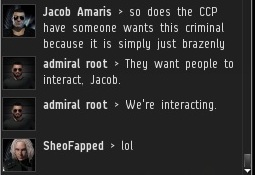 "Simply Just Brazenly" sounds like the title of a Hollywood chick flick.

The next time you take a trip to Germany, don't call anyone a "new record", as it's apparently quite an insult. After seeing Jacob's example, a Russian-speaking miner tried to get in on the action, with even worse results:

If this is how we sound to the miners we talk to via Google Translate, it's no wonder they're reluctant to pay their 10 million. "You have violated the Code. Pay 10 million isk or risk blimey forest with his blow. See www.minerbumping.com for details..."
Posted by MinerBumping at 18:37