In the few short months of its operation, MinerBumping has already become the largest repository of EVE-related tears on the internet. The Grab Bag is a collection of just some of the miner tears that didn't justify their own posts. Now let's take a stand against triskaidekaphobia and commence edition #13 of the Grab Bag!

Getting the Hitler reference out of the way early this time. Ba'aruch Kehdori isn't a fan of the new regime in Abudban. 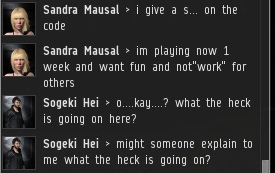 True to my word, we launched our liberation of Abudban with such speed and secrecy that the resident miners didn't know what hit them. Imagine Sogeki Hei's confusion when he logged in and discovered his mining spot has been transformed from a dead zone into a beehive of activity. 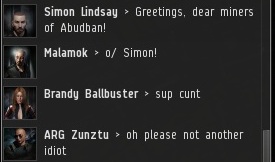 Denialism is almost extinct, but occasionally you get someone who thinks everyone is my alt. My fellow Agents, I would be proud to have you as my alts! I'm not going to pay for all your subscriptions, though. 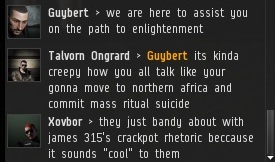 The Jim Jones references are making a serious play for the top spot, though the Führer is still hanging on by a meathook. Just a minor correction, though: Guyana is in northern South America, not Africa. It's easy to remember, because the world's largest river is also in South America rather than Africa. 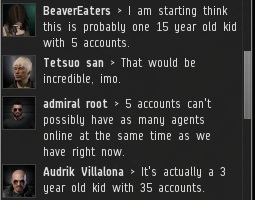 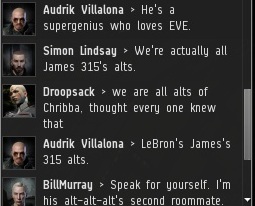 Another example of denialism gone awry. The proliferation of Agents and supporters of the New Order has rendered the alt accusations of the past obsolete. 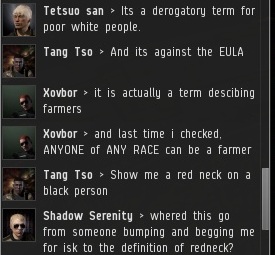 No matter where the conversation in highsec goes, it always circles back to the New Order. We take our rightful place at the center of the galaxy.

Some rebels scoff at our achievements, but when their own accomplishments consist of sitting in a station and smack talking, do they have a right to criticize? 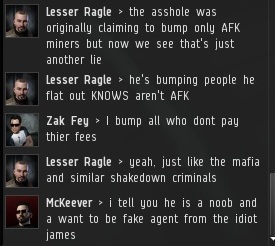 You know how you can identify a miner who has skimmed the Code instead of really delving into it? They think we only bump AFK miners. Reading the Code really isn't something you should rush. The Code is to be savored, like a fine wine.

There's no end to the twisting of logic by miners like Auduin Samson. He makes AFK miners out to be the good guys! 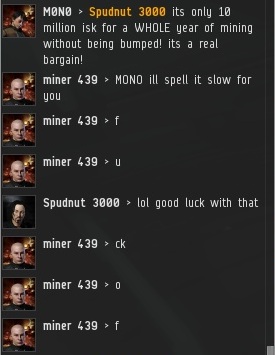 Spelling things slowly can help an angry miner avoid typos, but it only goes so far. And no, he never did spell out the final "f" in "off". 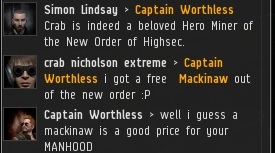 There remains a split in the miner community. Those who want to drive us out by withholding payment abhor those who pay. I'd say the former group needs to give it up. We're selling way too many permits to be stopped now. Time to stop living in the past. Time to join the rest of us, living in the future built by the New Order.
Posted by MinerBumping at 03:03