The Nastiest Weapon in EVE

It began with mprotector, who complained about miners being "disconnected". At first, I thought something was lost in translation: Maybe a non-English speaker was referring to his ship being bumped out of range and "disconnected" from its target asteroid. 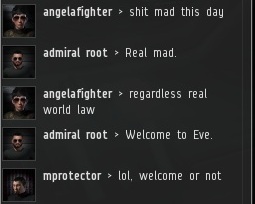 angelafighter chimed in with the same complaints, as if she were mprotector's alt. Regardless, they were of one mind on this issue--something so serious as to invite "real world law". Really, by this point we need a law firm that only takes EVE-related cases. 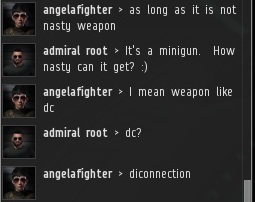 angelafighter confirmed everyone's worst fears. According to her, the enemy of the highsec miners had access to a truly nasty weapon: The power to disconnect other players from EVE. The reputation of our omnipotent power grows.

Agent admiral root was skeptical about her theory. But angelafighter was confident she would prevail during a fair hearing at space court. 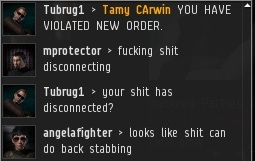 mprotector renewed his complaints. To angelafighter, this was the last straw. It was time to educate her fellow miners about the latest threat posed by the New Order. 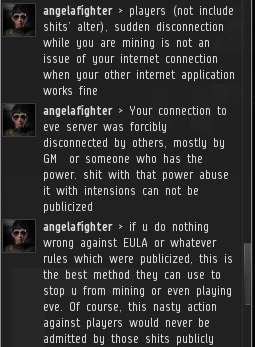 She had it all figured out. The GMs must be using their power to interrupt the miners' connections! angelafighter wasn't the first person to become convinced that half the GMs work for me. Maybe there's something to it? I mean, if you were a GM and spent all day answering petitions from whining miners, wouldn't you join the New Order? 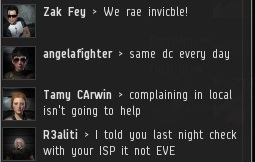 For once, a miner had stated proper grounds for a harassment complaint, sort of. First she would need to prove New Order Agents were using GM abilities to disconnect miners. Once she does that, we can revisit the issue.

...On the other hand, within a couple hours of angelafighter's complaints, EVE went down for an extended, unscheduled downtime. If you're an Agent and you have access to the EVE server hardware, please be careful!
Posted by MinerBumping at 18:11