Previously, on MinerBumping... Once the grand fleet of bumpers occupied the Abudban system, there was no more denying the power of the New Order. Suddenly, miners realized paying for mining permits made sense. 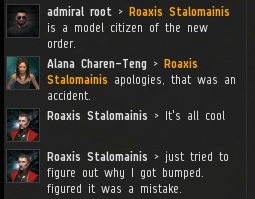 Even rebel miners started switching sides. The situation turned so quickly it was difficult for Agents to keep up.

Roaxis Stalomainis had assaulted an Agent with a smartbombing Rifter when we first arrived, but he had a change of heart.

To help Agents avoid bumping miners who have already paid, miners pledge loyalty in their bios. 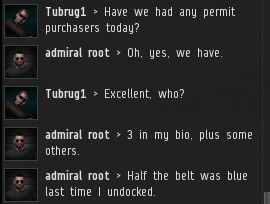 Where the New Order goes, the steady march of progress follows. 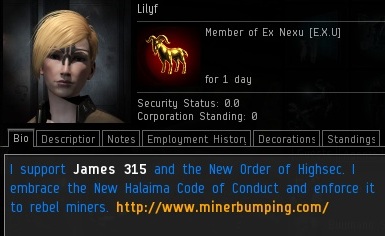 Miner Lilyf decided to add some color to her loyalty oath. We have come a long way since Airon Taiyou invented the loyalty pledge bio. 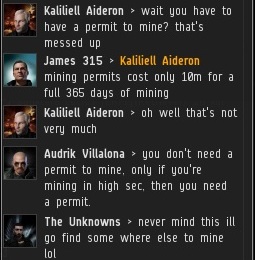 Newcomer Kaliliell Aideron was taken aback when he first learned about the mining permit requirement. But he found it affordable. Audrik Villalona, once a skeptic himself, helped educate fellow miners about how to adjust to the new regime in highsec. 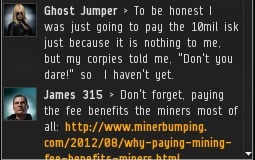 Some corporations have urged their members not to pay for any fees. 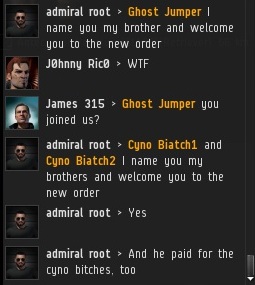 However, it just makes too much sense to join the New Order. 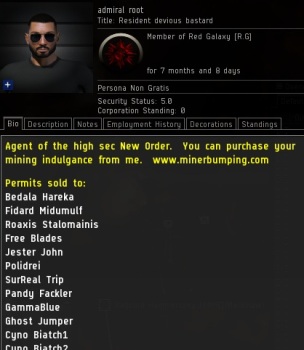 Agent admiral root took the step of listing the miners who bought permits from him in his own bio. But he soon realized he would run out of space if he continued. 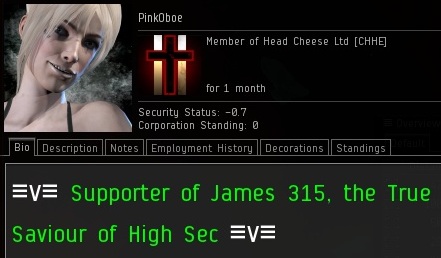 Often, it is the miners themselves who become the best ambassadors for convincing others to join the New Order. 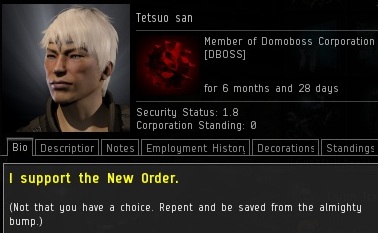 Though some miners still sport the "bumper sticker" pioneered by Airon and made famous when crab nicholson extreme pasted it into his own bio, there is now quite a bit of diversity among the pledgemakers.

At the dawn of the New Order, many were skeptical about the possibility of a civilization being built from the chaos of highsec. Undaunted by the challenge, our Agents have courageously stepped forward and electrified every system they touch. They have brought life where before there was only silence and bot-aspiration. Slowly but surely, miner resistance gives way to enthusiasm and a belief in the possibility of a brighter future for highsec. A future in which all miners can be united, standing together under one Code and one Supreme Protector.
Posted by MinerBumping at 03:02