The Carebear and the Crab

Previously, on MinerBumping... Anslo, the leader of the anti-Order "Proveldtariat" movement, was infuriated by a pro-Order miner in the Tolle ice field. Anslo began bumping him. But crab nicholson extreme is among the most widely-respected miners in Tolle, thanks to his early and enthusiastic support of the Code. 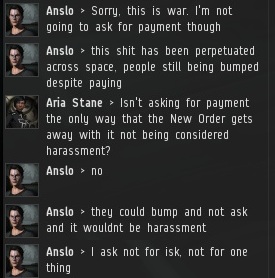 Anslo did not ask for any isk. Aria Stane, an onlooker familiar with the New Order but not openly supportive of it, asked a very interesting question: If Anslo bumps crab without any economic motive, isn't that harassment? It's unclear. 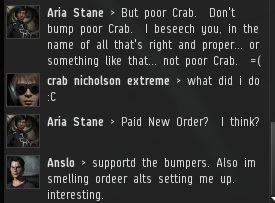 Like many in Tolle, Aria was a friend of crab. Anslo was immediately suspicious. 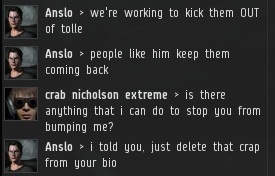 Anslo demanded crab remove his pledge of support for James 315 and the New Order from his bio. crab refused to be bullied. 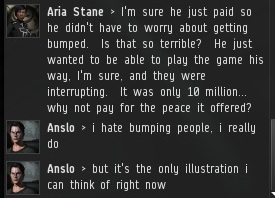 Anslo insisted he didn't like bumping, but that he had no other recourse to fight the New Order. 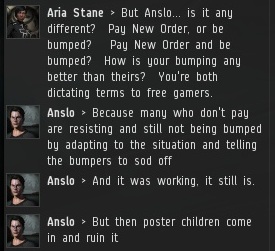 By being a "poster child" for the New Order, crab torpedoed Anslo's plan for an embargo. Like many, Anslo believes that if miners just ignore the New Order, it will go away. 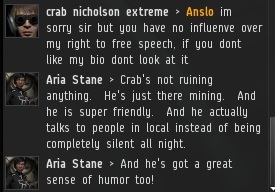 Enraged, Anslo accused Aria of being an Agent of the New Order and demanded an end to the conversation. 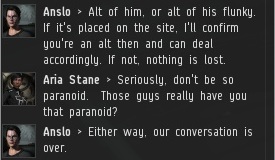 Aria denied being anyone's alt, but Anslo was having none of it. There were, in fact, a few Agents in local, but Anslo declared that if the incident were discussed on MinerBumping, it was proof of Aria's althood. 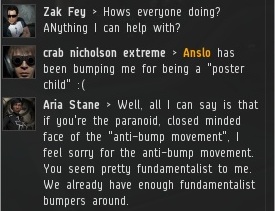 It was a public relations nightmare. Aria was sympathetic toward the miners' cause, but Anslo alienated her more and more. 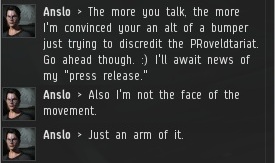 Even after ending the conversation twice, Anslo continued his alt accusations. He also said he wasn't the face of the Proveldtariat movement--an interesting claim, considering he's the only member of the movement we've seen thus far.

We're free to use any methods we like to discredit the Proveldtariat. Apparently the most effective method is to sit back let Anslo do his thing.

Brilliant as always, crab raised the ultimate problem with Anslo's "bump the pro-Order miners" strategy: There are far more bumpers in the New Order than anywhere else, so you're always better off paying the New Order--even if you risk being bumped by someone like Anslo. Disgusted, Anslo ended the conversation once again. 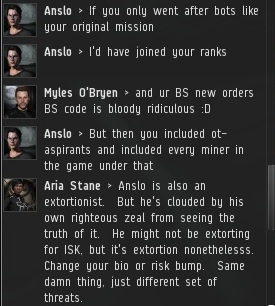 Like an undead monster in a horror movie, the conversation kept returning to life, no matter how many times Anslo tried to kill it. 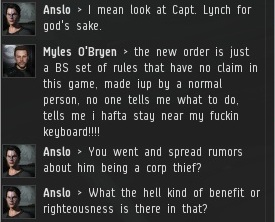 Among Anslo's many grievances with the way the New Order governs highsec: Our treatment of Capt Lynch. 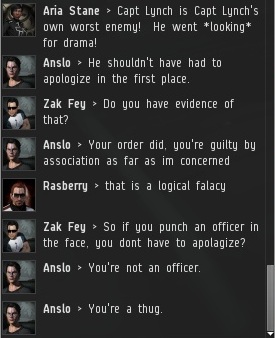 And so it was. crab stood up against the tyranny and oppression of the Proveldtariat, and was rewarded with the respect and admiration of all Tolle. Anslo's bumping had no effect, except to drive a wedge between himself and those who might have supported him.
Posted by MinerBumping at 03:21