In my State of the Order address, I discussed many topics. But I didn't discuss the effect of local resistance against the New Order. That's because, well, there wasn't any. The New Order rolled in, and the miners didn't lift a finger against us. Rebel miners aren't especially good at doing things. Luckily for us, they are good at talking about doing things. They engaged in many tear-fueled discussions about how to defeat us. 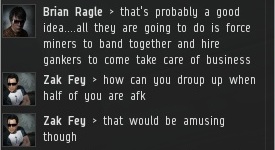 Once ice miner boasted that the miners would band together and hire gankers. Agent Zak Fey pointed out a big weakness of AFK miners: They're AFK. 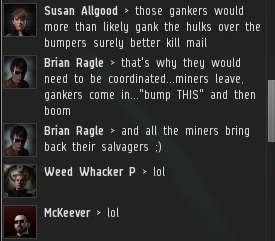 Other miners were anxious about inviting gankers into the system, because the gankers might turn against the miners. Brian Ragle was confident a coordinated effort by miners could pull it off. 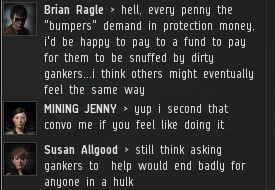 Brian suggested the miners pool their isk to fund the effort. Needless to say, this never happened. Isk-hoarding miners tend not to be the most generous people.

The upcoming EVE expansion will change the bounty system, though I suspect these miners don't know how it will affect the game. Meanwhile, Dipak P played the "powerful friend in nullsec" card, but that never went anywhere, either.

...Then there was the wardec option. That conversation was brusquely interrupted by pro-carebear forum warrior and self-styled resistance leader Anslo, who advised against wardecs.

This irritated the miners, who wanted to at least engage in fantasies about wardecs, if not actually pay for them. 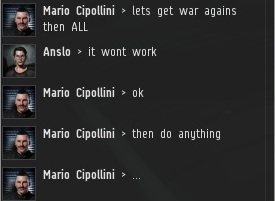 Mario Cipollini fumed at Anslo's defeatism. In fact, Anslo actually had plenty of ideas for the resistance: 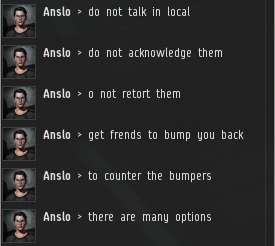 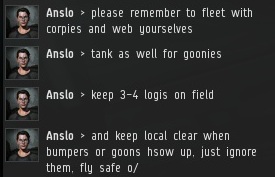 Anslo's laundry list of actions that the miners needed to take was met with silence. I can just imagine what the miners were thinking. They only wanted to be AFK, and Anslo was handing out homework assignments like a cruel teacher on a Friday afternoon. 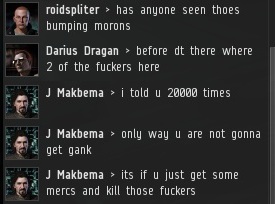 The next day, the rebels of Tolle reconvened to talk strategy. After making sure there were no New Order spies about, they began venting their frustrations. J Makbema was upset about his fellow miners' inaction. However, the Goons' Gallente Ice Interdiction remained a complicating factor. What if the Goons attacked the mercs? 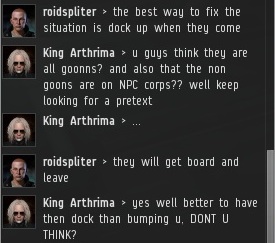 roidspliter got tagged with the "defeatist" label. Highsec miners are such creatures of habit. They would rather dock up than move to another system to mine! 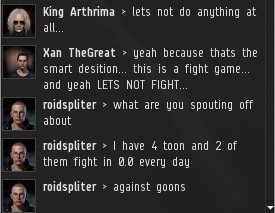 roidspliter became his own "powerful friend in nullsec". If the preferred strategy is docking up, it's no wonder the Goons are so successful in their wars.

You can only lose so many battles against the New Order before the infighting and recriminations start. 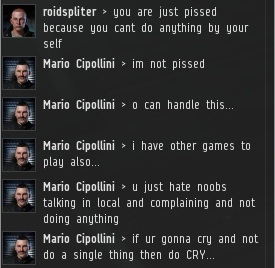 Poor Mario gnashed his teeth at the laziness of the resistance. This is a classic collective action problem: The collective agrees action is necessary, but individually they would rather someone else do the work, so no action is taken. Toss AFK'ing and bot-aspiration into the mix and you can guess the result.

The silver lining? If miners are powerless, they also can't hurt each other when they get into a fight. 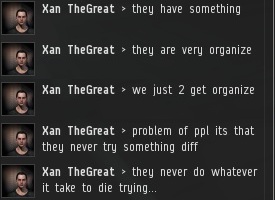 This is my problem with the whole "I won't pay because of the principle" line so many miners take. It's plainly obvious that miners have no principles. 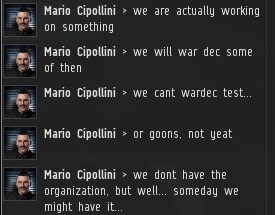 With enemies like these, is it any wonder the New Order marches from victory to victory? If you're reading this and you're considering rebellion, save yourself the frustration. The more time you spend with rebels, the more you will grow to dislike them. If you really want to help, join the New Order and encourage your fellow miners to do likewise!
Posted by MinerBumping at 03:17