Previously, on MinerBumping... Capt Lynch appeared on the MinerBumping radar after having a weird conversation with me about how to improve the New Order. When it came to light that he was lying about an Agent making his brother cry, he was challenged to a duel by one of our other Agents. I advised Capt to make an apology. 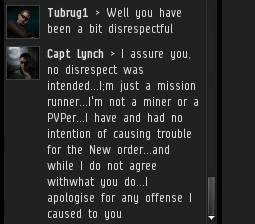 Capt offered to personally deliver an apology to my Agents, so I sent out a call to any Agents who wanted to be invited into the private convo. Agents Tubrug1 and admiral root happened to be available. Once they were in the convo channel, Capt made his apology. 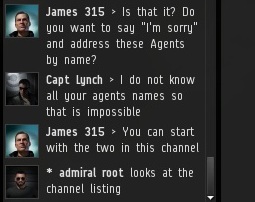 I was concerned that Capt might botch the apology, and he did. I gently but firmly guided him through the process. 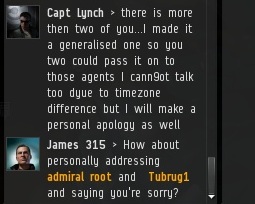 I wanted Capt to know that I was disappointed in him and expected him to correct his mistakes, but that I was not angry. I would teach him how to grow up and act with honour. As Father of the New Order, I am very much like a father to the people of highsec. Not altogether dissimilar to the character portrayed by Sean Bean on HBO's "Game of Thrones". 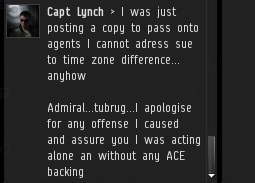 Capt was eager to protect "ACE" (Ashfell Celestial Equilibrium), the corporation to which he belonged. 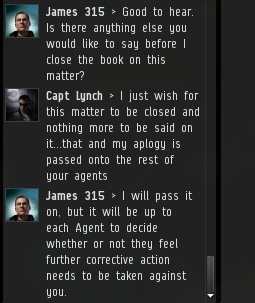 It is not for me to accept Capt's apology on behalf of everyone else. When he made up a story about an Agent making his brother cry, he committed a crime against all Agents. Each individual Agent must decide for himself whether to accept the apology. 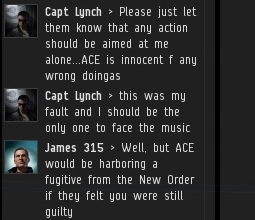 There was a slight complication where ACE was concerned. The New Order does not look favorably upon corporations that harbor those who defy the New Order. 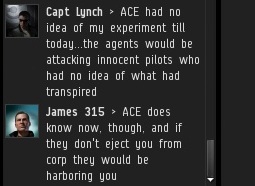 The possibility of retaliation against ACE remained open. Long-time readers may recall the case of Hail Heaven, who had been expelled from his corporation for the crime of showing me disrespect and non-compliance. A wardeccing corp loyal to the New Order sent a complaint about Hail to Hail's CEO and threatened a wardec. Hail had been a member of that corp for a year, but they got rid of him to avoid the trouble. Capt was anxious not to share a similar fate. 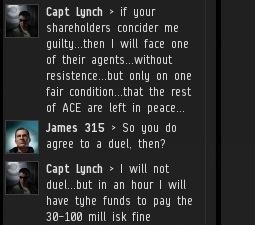 Capt, who earlier in our conversation said he would never pay me any isk, now offered to pay me 30 to 100 million isk as a fine, to protect ACE. 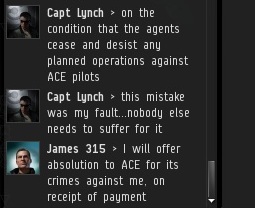 I was very clear and precise about what the 100 million isk fine would cover.

The two Agents, who were quiet but attentive throughout this process, served as witnesses.

It didn't take an hour for Capt to gather the funds. Within moments he was ready to send the money. I confirmed I was ready to accept the money--which I always am.

The payment looked to be in order. As to where Capt got the idea for the amount, I am uncertain. His earlier reference to 30 million isk obviously came from the Red Pen penalty, and earlier in this saga he complained to EVE's "Help" channel that a can-flipper Agent of mine tried to "extort" 100 million isk from him. I guess this was a really roundabout way of paying his ransom. 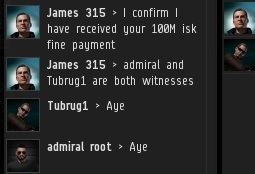 Everything was legal. It doesn't get any more official than two Agents of the New Order saying "aye". After exchanging some pleasantries, Capt bid us adieu. So everything was settled, then? Not quite. 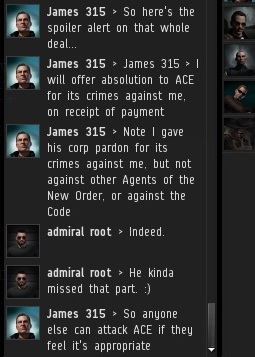 In exchange for the 100 million isk fine, Capt had ensured ACE would not be attacked by me. Though my Civilian Light Electron Blaster was thereby taken off the field, there were still a lot of Agents out there who didn't want excuses or apologies. They wanted justice.

To be continued...
Posted by MinerBumping at 01:35