Why Miners Refuse to Pay, Part 1

While the best and brightest of highsec are quite eager to comply with the Code, many miners refuse to pay--at least, for awhile. The question of why a miner would refuse to purchase a 365-day mining permit for 10 million isk is one of the great conundrums of highsec. It's indisputable that paying for a permit is economically rational; it's simply too easy for bumpers to cost a miner more than 10 million isk in a year. Indeed, when it comes to AFK ice miners, a bumper can deprive his target of 10 million or more with barely any effort whatsoever. 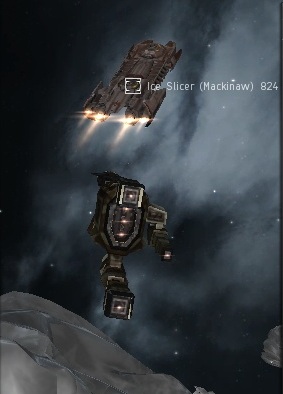 I came across Ice Slicer some time ago. She was illegally mining in the Halaima ice field until I brought her criminal activity to a halt.

A lot of miners use the classic Miner Bingo line that goes, "even if it's economically rational to pay, I refuse to pay out of principle". This is preposterous, since highsec miners have no principles. They are quite willing to bot, AFK mine, evade wardecs, etc. while engaging in solo "gameplay" that they find too boring to hold their attention. They do this all for isk. Yet if they are motivated entirely by isk, why not do the economically rational thing?

Clearly, there's something more at work. Miners are motivated by isk, but they must also be motivated by something else--something that enables them to justify behaving in an economically irrational manner. I decided to find out what it is. 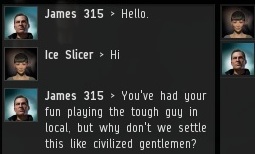 I sent Ice Slicer a convo request. It's rare that I'm the one sending the request, but I wanted to delve into her psyche. Perhaps if I could find out what makes her tick--or rather, what makes her not tick--I could fix her. 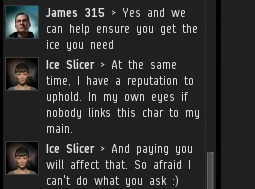 IS was concerned that if she paid for a mining permit, it would hurt her reputation. Even though she was admittedly an alt.

The conversation had only just begun, but we were making good progress. IS would think less of herself if she purchased a mining permit. Time for me to put on my "counselor" hat again. 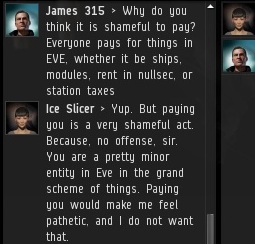 Unlike all of the NPC and player entities to which IS routinely paid money, I was a "pretty minor entity". Quite a comment by a random ice miner speaking to the Father of the New Order, author of one of EVE's most popular blogs! These are the times when the Saviour of Highsec earns his paycheck. I was here to help the miner identify and repair her cognitive dysfunction, not defend my own ego. I remained focused and professional. 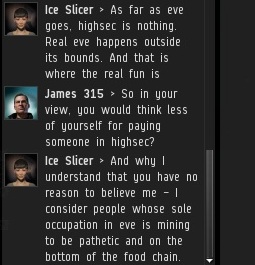 There was no doubt about it. Ice Slicer was a self-hating miner!

I tried to help her concentrate on achieving her goals. She was allowing her own irrational impulses to control her, to thwart her. That's not a sign of strength, but of weakness. 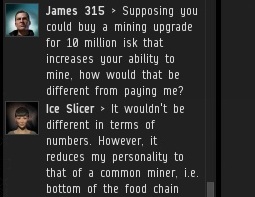 Once more, the miner felt paying my fee would degrade her... into a miner. 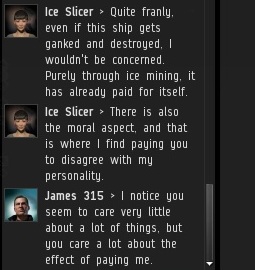 IS had serious hang-ups, no question. If I could get to the bottom of her issues, maybe there was hope for all non-paying miners. I'm confident their non-payment comes from a similar place. 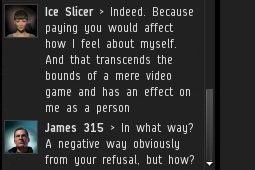 Ice Slicer's honesty presented a rare opportunity. Most miners have difficulty articulating exactly why they feel so averse to paying even when consciously aware it's in their own best interest. IS believed paying me 10 million isk to avoid being bumped for 365 days would have serious out-of-game effects. What could she possibly mean by that?

To be continued...
Posted by MinerBumping at 02:04