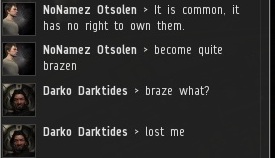 When some Agents went on a coffee break in Abudban, ice miner NoNamez Otsolen took the occasion to rabble-rouse, agitating in favor of common ownership of the ice field. 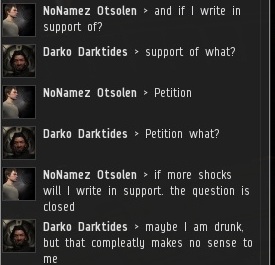 It looked like a case of a Russian player using Google Translate to get his point across. Last time, when a German player tried it, things didn't go so well. 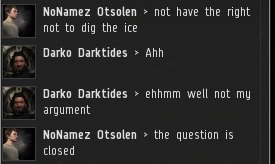 NoNamez held onto outdated notions of what highsec miners are entitled. He was not willing to hear reason from anyone. 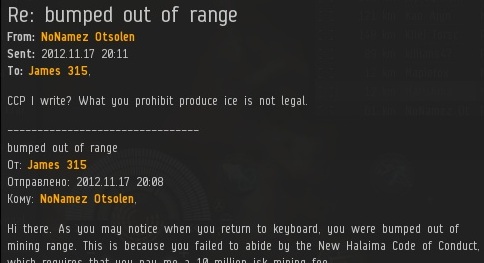 Later, I found NoNamez mining without a permit, so I transported him to the designated "no permit" section of the ice field, which is located safely beyond mining range. As a courtesy, I sent him an EVEmail letting him know the reason for my action, and how he could remedy his noncompliance of the Code. He returned to the keyboard and replied. Note that the non-English clients preserve the "from", "sent", and "to" portions in their original language when forwarded.

Then things got real. NoNamez set me to negative standings. Contrary to his expectation, this did not stop me from bumping him out of range. Rather, it tended to increase the frequency of bumps.

Private channels having failed, NoNamez brought it to the mean streets of Abudban local itself, calling on the people, "Who ram write CCP!" Agents tried to reason with him, but it was no use. Space lawyers are supremely confident in their interpretation of the EULA, no matter what language they speak. 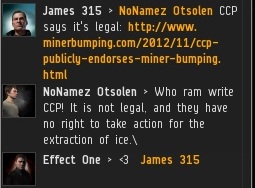 I hoped to spare GMs the unnecessary burden of more petitions, so I linked the official CCP policy on bumping. 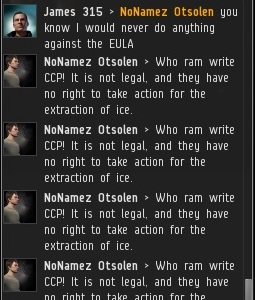 However, NoNamez apparently had a slogan that he felt worked for him. So he said it over and over. Somehow it failed to catch on. But you know, it's hard to compete with "Pay 10m or risk bump!"
Posted by MinerBumping at 17:20