It's the feel-good story of the week! I was reigning over the oddly-named Carirgnottin system, next door to our vacation home of Tolle. The natives were restless.

Suddenly, ice miner Rick Witham solved the enigma that has confounded our enemies for months. He developed the perfect plan to defeat the New Order.

Just kidding! Rick was just another counter-bumper. This story isn't about him. 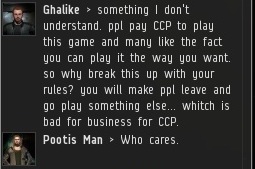 After Rick's master plan unexpectedly failed, Ghalike became frustrated by the New Order's use of force in Carirgnottin. He didn't like the idea of having to follow the Code.

I believe mankind wants and needs order. People enjoy freedom, but freedom without boundaries is like a window without a wall. We need rules to be happy.

Some people engage in risk-free, rule-free highsec mining because they want to exercise some control in their lives. They want to be their own boss for awhile. I don't believe that's a valid way for people to use EVE, so the New Order helpfully takes that option off the table.

Seeing the days of anarchy coming to an end, Ghalike decided to quit EVE entirely. 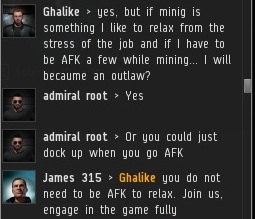 Sometimes trying to reason with a miner is like talking to a slab of concrete. But other times, reason wins out. 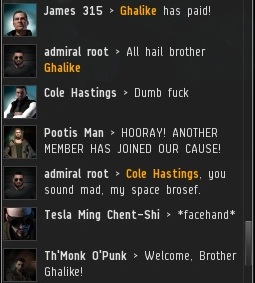 Ghalike reconsidered. He sent in his 10 million isk and joined the ranks of the happiest miners in EVE. Rebel miners Cole Hastings and Tesla Ming Chent-Shi didn't share the jubilation of our Agents.

In less than ten minutes, Ghalike had gone from threatening to unsub, all the way to paying me and joining the New Order. When Ghalike came to EVE, he thought he was seeking single-player oblivion and independence. What he found was a community and a Code. It's the power of the New Order at work, saving highsec one miner at a time.
Posted by MinerBumping at 18:04