Model Miner Helps a Brother Out 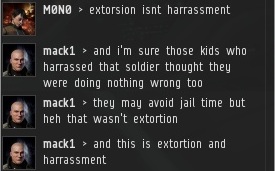 One night in Tolle, ice miner mack1 went on another rant, telling some story about EVE players getting charged by the U.S. military for "harassing a soldier". Same tears, different day.

Enter crab nicholson extreme, a hero miner. crab is famous in Tolle as the first miner in the system to pay his 10 million isk fee to the join the New Order. Now he was set to blaze another trail, by offering to purchase a mining permit on behalf of another miner. 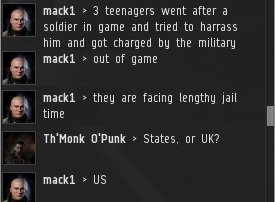 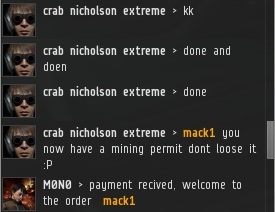 The Code permits anyone to purchase a mining permit on behalf of anyone else. crab took pity upon mack1, and just like that, mack1 was legal.

What a contrast: On the one hand, the dignity and grace of New Order hero miner crab, and on the other hand, mack1's unsavory everything. Like I've always said, if you want to convince people to join the New Order, just place a New Order member and a rebel side by side. The case makes itself.

But mack1 was less than impressed. Ingratitude from a rebel? Color me shocked. 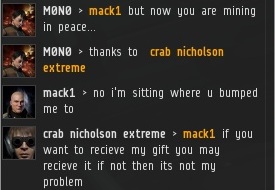 If anything, mack1 only became more grouchy. Perhaps he's one of the rebels who thinks the bumpers will only go away if they stop getting paid.

The display of mercy and generosity was not sufficient to transform mack1. He continued to rail against the New Order. I've been told he forfeited his permit by committing foul crimes against the New Order, which is a shame. For some miners, there's only one cure: More bumping.
Posted by MinerBumping at 17:02