Shareholder Vote: Should CCP Eterne and CCP Falcon Be Made Honorary Agents?

There are countless ways to act as an Agent of the New Order; any action taken to advance the cause of our movement, our leader, and our Code is a revolutionary act. Therefore, even positive actions taken by a member of CCP itself could be considered the actions of an Agent.

This brings us to the recent, high-profile actions taken by two members of CCP. For obvious reasons, CCP developers must at all times remain neutral. They cannot favor corporations, alliances, or any other in-game faction. They cannot publicly declare themselves Agents of the New Order. But under certain circumstances, they could be made honorary Agents.

I am, of course, referring to the events described in yesterday's post. On EVE-O, CCP Eterne commented that miner bumping and suicide ganking are not petitionable actions. I made a post about it, since it was the first time a member of CCP had ever publicly confirmed this--though hundreds of petitions against us have been denied.

Galaxy Pig, a vocal supporter of the New Order on EVE-O, has long sought official confirmation that miner bumping is permissible. CCP always shied away from making a definitive statement about it, leading some observers to conclude that they were trying to maintain flexibility in case the New Order became too powerful.

After my post about CCP Eterne's comment, Galaxy Pig returned to EVE-O and trumpeted the victory. This induced CCP Falcon to make a more lengthy post about the legitimacy of bumping miners.

But CCP Falcon took it a step further, writing "There are plenty of options to counter [bumping], if you use your imagination." That sounds to me like a complete rejection of miners' demands to nerf bumping (via aggression flags to bumping, space anchors, etc.). The carebears always offer up some variation of "there's no counter to bumping", so Falcon's remark is surely intended as a strike against them.

Okay then, let's get down to business. 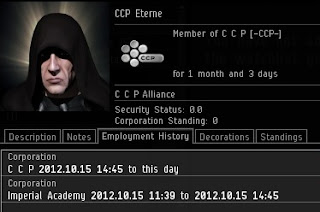 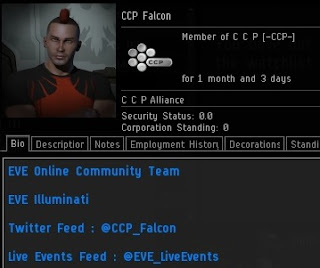 CCP Eterne and CCP Falcon are members of the EVE Online "Community Team" that joined CCP about a month ago. (Just as the New Order was in a period of rapid growth! Coincidence?) They have been nominated for the honour of becoming honorary Agents of the New Order. But it is up to the Shareholders of the New Order to decide whether this is necessary or appropriate.

You know the drill.

Shall CCP Eterne and CCP Falcon be named honorary Agents of the New Order?

[ ] Yes, they have taken a bold and unprecedented stand in favor of Order and against the nefarious space lawyers and carebears of the resistance.

[ ] No, they were just doing their jobs, the same as any GM who denied a petition against us.

The voting period will last from now until Tuesday, November 20th at 02:00 EVEtime (Monday, November 19th at 9:00pm Eastern).
Posted by MinerBumping at 19:33