Rebel Exitus Raven was seen buzzing around the ice field of Abudban, vainly attempting to counter-bump our Agents. When Exitus realized how ineffective he was, he grabbed a proper suicide-ganking Thrasher and prepared to attack Agent Daf Ook's Stabber. 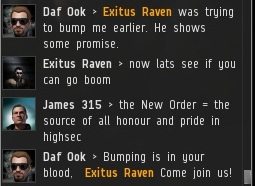 Miners frequently begged CCP to nerf suicide ganking, because supposedly it's too easy to do. When these same carebears try to suicide gank Agents of the New Order, they learn a lot about EVE game mechanics.

Exitus needed a little help calculating whether he would have enough time to kill Daf's Stabber. Now it was up to Abudban local to provide information about Concord. Accuracy was absolutely critical. Would Concord respond in 12 seconds, or 15? Perhaps 20? Even being off by a second or two could spell disaster for Exitus' plan. 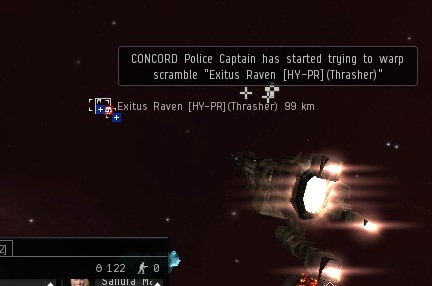 Armed with bad info, Exitus made his attack. Concord appeared and helped Daf swat away the rebel's ship.

Orions Lord also participated in the battle--by shooting at Exitus. 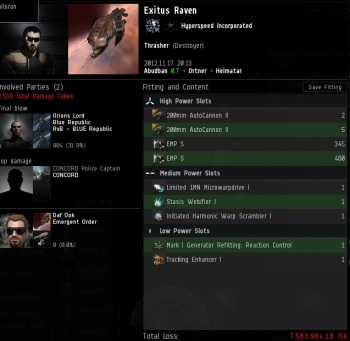 Unlike other would-be assassins, Exitus had fit his ganking ship a bit more like an actual ganking ship. But even then, performing a successful gank was more difficult than Exitus anticipated.

Exitus found Orions Lord's honour lacking. Not because he deliberately gave him a wildly inaccurate estimate of Concord's response time, but because he interferred with the gank. I'm not totally sure I get the "2v1" thing. If Daf and Orions make 2, and Exitus is the 1, where does that leave Concord?

As it happened, Orions Lord is an Agent of the New Order. A well-known can-flipper, Orions frequently sends EVEmails to his victims informing them that they were killed in the name of James 315 and the New Order. Exitus probably should have looked for a second opinion on the whole Concord thing. 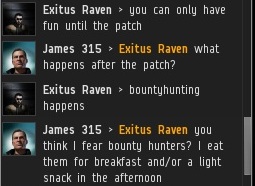 Exitus remained confident he would have the last laugh. When bounty-hunting takes place, it will be curtains for the New Order! (Or maybe not.) Like so many others, Exitus thought the new bounty system would leave players less protected by Concord. I don't know where people are getting that idea, but it's spread far and wide. 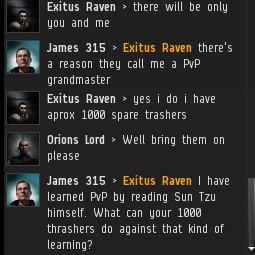 If people do think they can defeat us by putting bounties on our heads, let them try it. But if they want to save their money, they can much more affordably deal with us by paying Agents 10 million isk. As is appropriate.
Posted by MinerBumping at 20:44