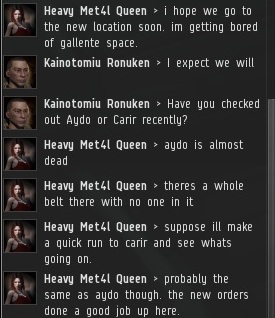 After a lengthy vacation in Gallente highsec, it was time for the New Order to move on and share the Code with some new people. 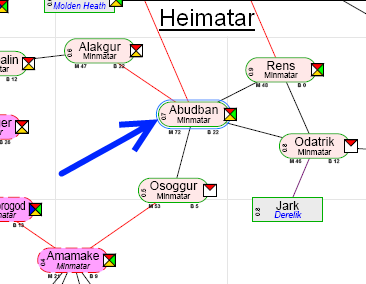 I drafted our next move in complete secrecy. Our destination? Abudban, an ice field system in Heimatar, a Minmatar region of highsec. It's unique, because it's only one jump away from Rens. Yes, that Rens, one of the few giant trade hubs in EVE. No other ice field system in EVE is located so close to one. Needless to say, Abudban is a popular locale for miners. It's also a couple hops from Amamake, a famous portal to low/null. The system gets a lot of traffic. 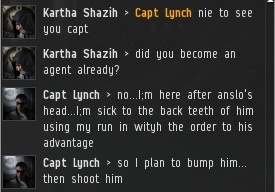 Unaware of our destination, Agents of the New Order gathered in Tolle to prepare the bumper fleet. Capt Lynch also turned up, but he wasn't here to bump. Somehow Anslo, leader of the anti-Order "Proveldtariat", had made an enemy of Capt. There was a rumor about Anslo planning to crash our party, so Capt was in Tolle for vengeance. It was shaping up to be a proper action movie: "There's no room for personal vendettas on this mission, Captain Lynch!"

Capt brought a Machariel, a faction battleship, with which to kill Anslo. But Anslo didn't show his face. Capt got bored and began using the ship to bump miners while he passed the time. 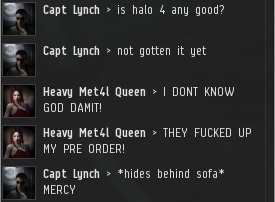 As our fleet gathered in Tolle, some idle chit-chat was had. 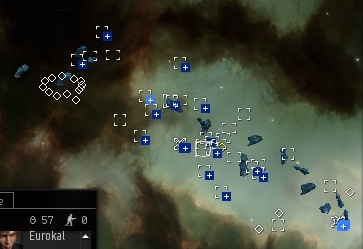 At the appointed hour, the ice field started to fill up with bumpers. Some familiar faces, some new. 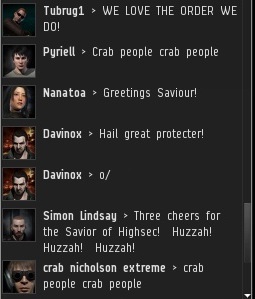 I entered Tolle and was greeted with a warm welcome, like the Saviour of Highsec might expect. 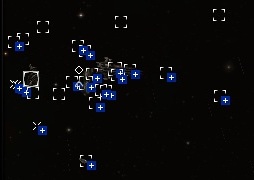 After spending some time bumping miners, the fleet gathered around, eager to hear the plan.

As I described Abudban's unique qualities, the Agents of the New Order salivated.

Before we left, crab nicholson extreme, known to all as the best miner in Tolle, decided to move along with the New Order. 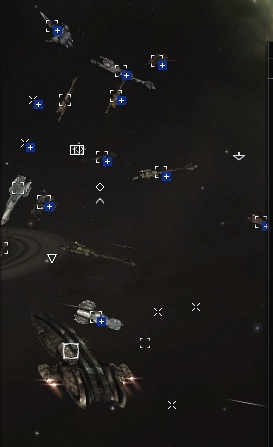 It was time to leave Tolle behind. When we'll see it again, who knows? But all highsec is destined to fall under our power. 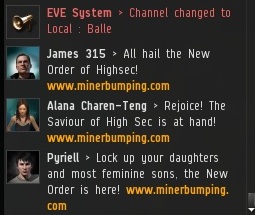 'Twas around 18 jumps to our new vacation home, deep in the heart of Minmatar highsec, where few Agents had yet tread. Per our custom, each system along our route got to experience our jubilation in local.

Capt was following along in his Machariel, still on the lookout for Anslo. Disaster was narrowly averted when Capt realized he almost jumped his billion isk ship into lowsec. 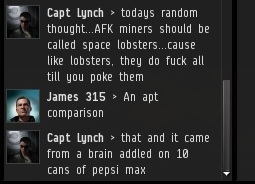 Meanwhile, Capt convoed me to share his thoughts about the day's excursion. 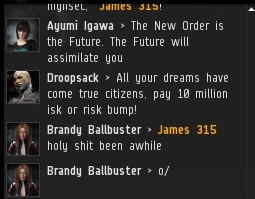 At last! We arrived in Abudban. Even this far from home, I was instantly recognized by one of the locals, who used to live in New Order territory. 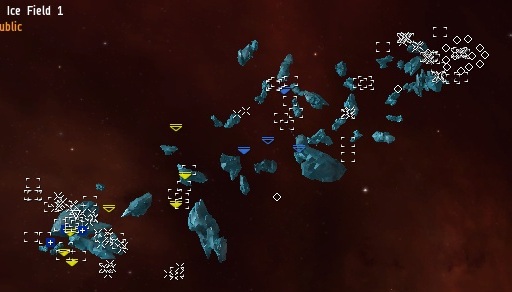 There it was: Abudban ice field, one of the most populated ice fields in EVE. Aside from crab, who had accompanied us on our journey, everyone mining there was doing so in violation of the Code. It was time to bust some punks.

To be continued...
Posted by MinerBumping at 02:28